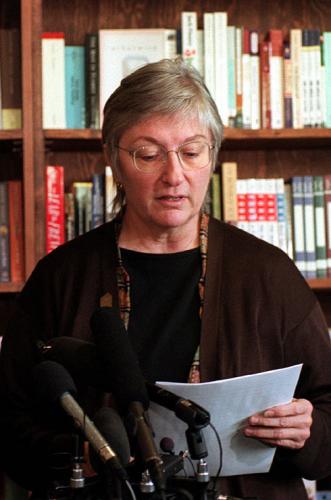 Denver, April 8, 2002  The Colorado Supreme Court today reiterated this state's long tradition of protecting expressive freedoms in unanimously holding that a city's attempt to obtain customer book-purchasing records from the Tattered Cover was precluded by the government's inability to demonstrate a compelling need for the records. Recognizing that book-purchasing records are protected by both the United States and Colorado Constitutions, the Court further held that in the future, anytime the government seeks to obtain such records, the bookstore must be afforded a due-process hearing in advance where a court will determine whether law enforcement officials have a sufficiently compelling need for the information.

The Court is the first state Supreme Court in the nation to address this issue. "Not only is this case a victory for readers and book purchasers in Colorado, but we believe the Court's opinion sets an important precedent for readers, bookstores, and library patrons throughout the country, who can now look to Colorado law for guidance when the First Amendment rights of readers collide with the desires of law enforcement," said Joyce Meskis, owner of the Tattered Cover Book Store, which brought the appeal.

The case arose from efforts by the North Metro Drug Task Force to obtain book-purchasing records of a suspected drug dealer. The Tattered Cover refused to turn over the records, arguing that the book-purchasing practices of its customers are protected by the Constitution, and that the government failed to demonstrate a compelling need for the records.

Writing for the Court, Justice Michael Bender rejected the City's arguments, and recognized that "the content-related uses of the book purchase records in this case are not easily separated from the non-content related uses." The Court stated, "Had it not been for the Tattered Cover's steadfast stance, the zealousness of the City would have led to the disclosure of information that we ultimately conclude is Constitutionally protected." The Court stressed that customer anonymity is vitally important to the free exchange of ideas inherent in the buying, selling and reading of books. "Anonymity is a shield from the tyranny of the majority. It thus exemplifies the purpose behind the Bill of Rights, and of the First Amendment in particular: to protect unpopular individuals from retaliation-and their ideas from suppression-at the hand of an intolerant society," wrote Justice Bender.

"This is a huge decision because not only does it mean that the police can't show up at bookstores in the future and rifle through customer book-purchasing records, but also because the Court recognized that bookstores are entitled to a due process hearing before any police action occurs," said Dan Recht, the lead attorney for the Tattered Cover.

"This is a victory for readers across the country," said Rick Kornfeld, one of the Tattered Cover's attorneys. "We're thankful to the Court for issuing such a clear, thorough and articulate opinion in support of the First Amendment, which is the bedrock of our free society. Coloradans are lucky to have the Tattered Cover, which is stubbornly dedicated to protecting the First Amendment rights of all of its customers."

Read the New York Times editorial by lawyers with the firm who defended the bookstore here.