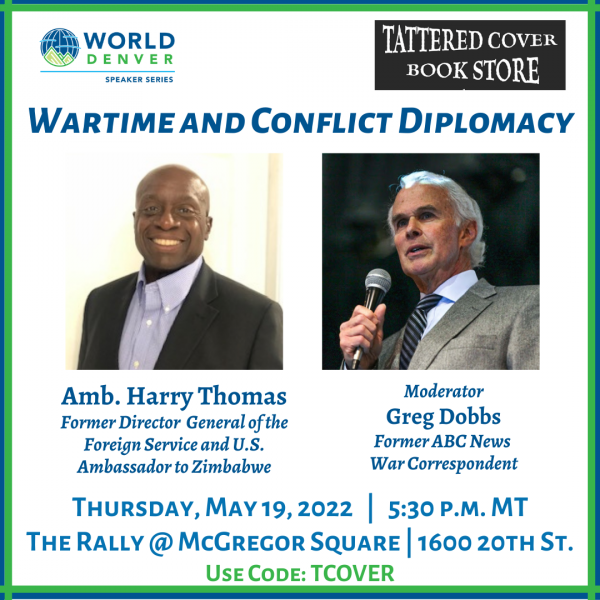 Though diplomacy is often thought of as an alternative to war, diplomats and international institutions play a critical on the front lines of an armed conflict. Beyond the central focus on maintaining peace and multilateral relations, diplomats must prepare for conflict when it is unavoidable, deploy resources and humanitarian support, and work with stakeholders to restore stability when a conflict is resolved. Diplomatic efforts have been crucial to international peace-keeping amidst Russia’s unprovoked invasion of Ukraine.

Join WorldDenver for a conversation between Ambassador Harry Thomas, former Director General of the Foreign Service, and Greg Dobbs, former ABC News Foreign Correspondent, on the evolving role of diplomats, the State Department, and the United Nations in preventing and responding to war and conflict. Presented in partnership with the Tattered Cover.

**Following the speaker program, our Young Professionals will be hosting a networking reception with Ambassador Thomas to continue the conversation on his expertise and distinguished career in the Foreign Service. This will also be an opportunity to engage with emerging European entrepreneurs from the Young Transatlantic Innovation Leaders Initiative program and learn more about working in the US Foreign Service. Details TBA. Ambassador Harry K. Thomas Jr. is a Senior Kissinger Fellow at Yale University’s Jackson Institute and a Senior Strategic Advisor at Special Operations Command, a private business consultant and an international affairs lecturer.  Over his 34-year Foreign Service career, he represented the United States abroad as Ambassador three times and served in senior positions at the State Department and the White House. He retired in March 2018 with the rank of Career Minister.

He served as ambassador to Zimbabwe, the Philippines and Bangladesh. Ambassador Thomas also served as the State Department’s Executive Secretary and Special Assistant to Secretary Rice, Director General of the Foreign Service and Director of Human Resources, Director for South Asia at the National Security Council and Director of the Operations Center.

Ambassador Thomas speaks Spanish, Hindi, Bengali and conversational Tagalog.  He is a graduate of the College of the Holy Cross and holds a master’s from Columbia University.  Ambassador Thomas holds Honorary Doctorates from the College of the Holy Cross, Loyola University of Maryland and Angeles University Foundation of the Philippines and was the Commencement Speaker at these institutions.

He is a member of the College of the Holy Cross, The Asia Foundation and Care for the Homeless Board of Trustees and Chairperson of the Winter4Kids Board of Trustees.  He is a Fellow of Yale University’s Berkeley College. Ambassador Thomas is the recipient of the Secretary of State’s Distinguished Service Award; the Arnold L. Raphel Memorial Award for Mentoring; the Senior Foreign Service Presidential Award and several Superior Honor and Meritorious Honor Awards; the Order of Sikatuna of the Philippines for Exceptional Service and the In Hoc Signo Vinces Award from the College of the Holy Cross.

He is married to Mithi Aquino-Thomas and has three adult children.  They reside in Tampa, Florida. He is a fervent fan of New York sports teams, enjoys snorkeling, golf and connecting with social media friends in the global community.