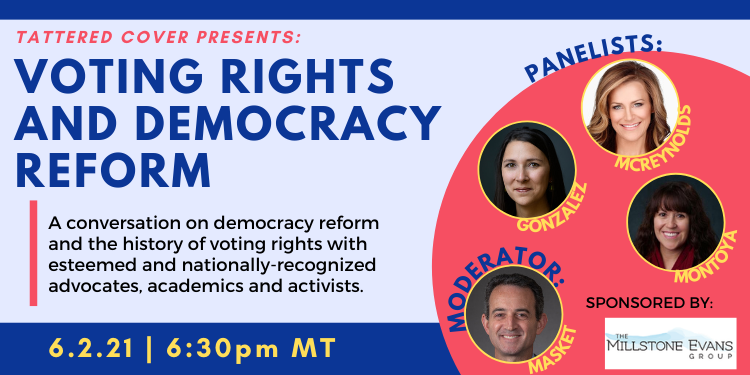 As our nation faces a reckoning on racial equity, our democratic institutions face a similar crisis - how to endure unprecedented political vitriol and polarization, while protecting fundamental and unalienable rights? Please join us on June 2 for a conversation on democracy reform and the history of voting rights with esteemed and nationally-recognized advocates, academics and activists.

Seth Masket is a professor of political science and director of the Center on American Politics. His research focuses on political parties, state legislatures, and campaigns and elections. He is the author of Learning from Loss: The Democrats 2016-2020 (Cambridge University Press), Political Parties (W. W. Norton), The Inevitable Party: Why Attempts to Kill the Party System Fail and How they Weaken Democracy (Oxford University Press), and No Middle Ground: How Informal Party Organizations Control Nominations and Polarize Legislatures (University of Michigan Press). Masket is a contributor to FiveThirtyEight and the Mischiefs of Faction blog. His work has also appeared in the Denver Post, the Washington Post, the Los Angeles Times, Politico, and The New York Times.

Amanda Gonzalez (she/her) is a connector, systems change agent, DEI educator, critical race theory geek, animal lover, and executive leader. In her career she has served as a grant writer, community organizer, staff attorney, program director, professor, CEO and executive director – always with the goal of creating more inclusive governments, businesses, and communities. She is currently the executive director at Colorado Common Cause where she leads a team fighting for open, honest, and accountable government. In 2020, Colorado Common Cause led the Just Vote Election Protection coalition, state’s largest nonpartisan election protection effort which recruited more than 1,100 volunteers to ensure that every eligible voter in Colorado was able to cast their ballot and have that ballot accurately counted.

She’s also served as a board member for Focus Points Family Resource Center, United for a New Economy, the Colorado Hispanic Bar Association, the Colorado Lawyers Chapter of the American Constitution Society, New Era Colorado Education Fund, and the Colorado Fiscal Institute. Amanda holds an undergraduate degree (psychology/cognitive science) from Occidental College and a law degree from the University of Denver Sturm College of Law. In 2015 she was named the Colorado Hispanic Bar Association’s Outstanding New Hispanic Lawyer and 2019 she was named one of Denver Business Journal’s 40 Under 40.

Amber McReynolds is one of the country's leading experts on election administration and policy. She was recently confirmed by the Senate to serve as a Governor for the United States Postal Service, is the Founding CEO for the National Vote At Home Institute and Coalition, co-author of the book ‘When Women Vote’, and is the former Director of Elections for the City and County of Denver, Colorado. Amber is an experienced election professional and is nationally recognized as an innovator and has proven that designing pro-voter policies, voter-centric processes, and implementing technical innovations will improve the voting experience for all.

Amber was recognized as a 2018 Top Public Official of the Year by Governing Magazine for her transformational work to improve the voting experience in Denver and across Colorado; she was recognized as one of the Top 25 Most Powerful Women in Business in Colorado in 2020; and was recently named as a 2021 Titan CEO. Amber serves on the National Task Force on Election Crises, the National Council on Election Integrity, the Advisory Board for the MIT Election Data and Science Lab, Advisor to Vot-ER, City Year Denver Board of Directors, Represent Women Board of Directors, Women’s Foundation of Colorado Empowerment Council, Public Policy Committee of the Colorado Women’s Chamber, Circle of Advisors for Democracy Fund’s Election Validation Project, and was a graduate of the Metro Denver Chamber of Commerce Leadership Denver 2017. Amber has a Masters of Science from the London School of Economics and Political Science and a Bachelor of Arts from the University of Illinois, Champaign-Urbana. Amber is also currently serving as a senior strategic advisor on various election-focused projects across the country, serves as an expert witness in election litigation, and collaborates with various national and state professional organizations to identify and implement best practices in election administration.

Celeste Montoya received her PhD in Political Science and a Graduate Certificate in Women, Gender, and Sexuality Studies from Washington University in St. Louis. She joined the Department of Women & Gender Studies at the University of Colorado Boulder in 2007. She also serves as the Faculty Director for the Miramontes Arts & Sciences Program (MASP).

Professor Montoya’s research primarily focuses on the ways in which women and racial minorities mobilize to enact change. She is interested in how these groups work within and outside of political institutions, domestically and transnationally, and intersectionally. Her work is informed by studies of social movements, public policy, political institutions, political behavior, and gender and race politics. Her regional areas of specialization are Europe and the United States.

-- This is a free, live stream event using Zoom Webinar