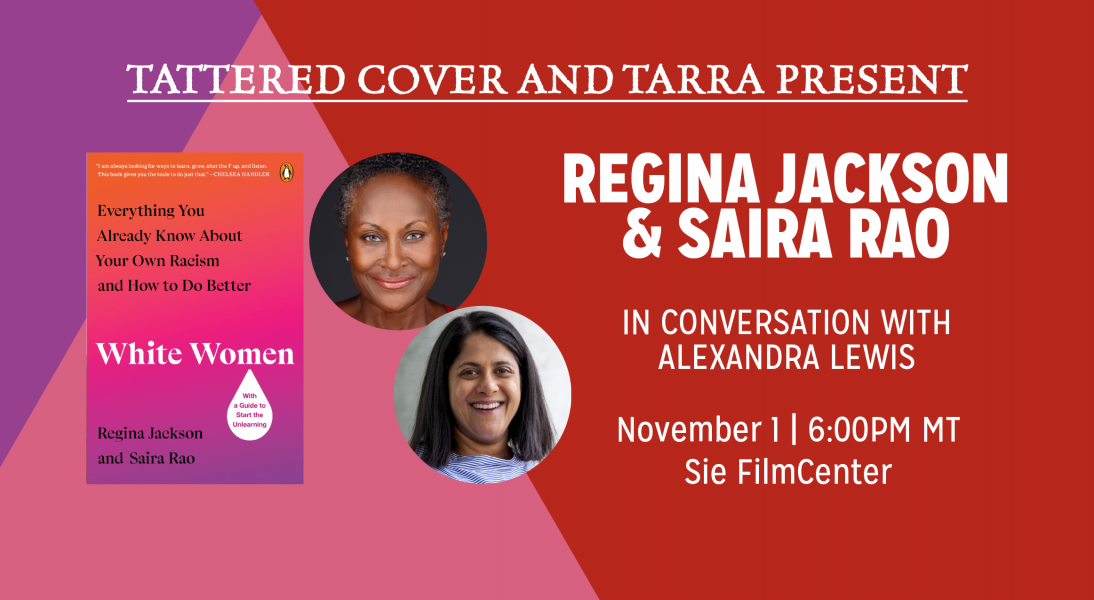 Tattered Cover is honored to partner with TARRA to present Regina Jackson and Saira Rao at the Sie FilmCenter on November 1st at 6pm. They will be presenting their new book White Women: Everything You Already Know About Your Own Racism and How to Do Better. They will be in conversation with Alexandra Lewis. This is a ticketed event.

A no-holds-barred guidebook aimed at white women who want to stop being nice and start dismantling white supremacy.

It's no secret that white women are conditioned to be "nice," but did you know that the desire to be perfect and to avoid conflict at all costs are characteristics of white supremacy culture?

As the founders of Race2Dinner, an organization which facilitates conversations between white women about racism and white supremacy, Regina Jackson and Saira Rao have noticed white women's tendency to maintain a veneer of niceness, and strive for perfection, even at the expense of anti-racism work.

In this book, Jackson and Rao pose these urgent questions: how has being "nice" helped Black women, Indigenous women and other women of color? How has being "nice" helped you in your quest to end sexism? Has being "nice" earned you economic parity with white men? Beginning with freeing white women from this oppressive need to be nice, they deconstruct and analyze nine aspects of traditional white woman behavior--from tone-policing to weaponizing tears--that uphold white supremacy society, and hurt all of us who are trying to live a freer, more equitable life.

White Women is a call to action to those of you who are looking to take the next steps in dismantling white supremacy. Your white supremacy. If you are in fact doing real anti-racism work, you will find few reasons to be nice, as other white people want to limit your membership in the club. If you are not ticking white people off on a regular basis, you are not doing it right.

Saira (NOT Sara) Rao grew up in Richmond, Virginia, the daughter of Indian immigrants. For forty years, she wasted her precious time aspiring to be white and accepted by dominant white society, a futile task for anyone not born with white skin. Several years ago, Saira began the painful process of dismantling her own internalized oppression. Saira is a lawyer-by-training, a former congressional candidate, a published novelist and an entrepreneur.

Born in Chicago in 1950 Regina remembers an America where everything was in Black and white. Burned into her memory are; the beatings and horrific treatment of civil rights workers throughout the south, the Goodman, Chaney & Schwerner murders, the murder of Viola Liuzzo, the murder of Martin Luther King, Jr. and the murders of President John Kennedy and his brother Robert. The violence perpetrated on innocent people going about their lives, by white people. It is these memories that drive Regina to push for real change in America. Which is why she co-founded Race 2 Dinner.

Alexandra Lewis is an Anchor at 9NEWS in Denver, Colorado.

Before coming to KUSA, Alexandra anchored 10 hours of news in Seattle, WA at KCPQ. During her time in Seattle, Alex covered historic wildfires, police reform, the homelessness and opioid crisis and groundbreaking elections. The Texas native has also worked in newsrooms in her hometown of Houston, TX, Dayton, OH, and Lafayette, LA.