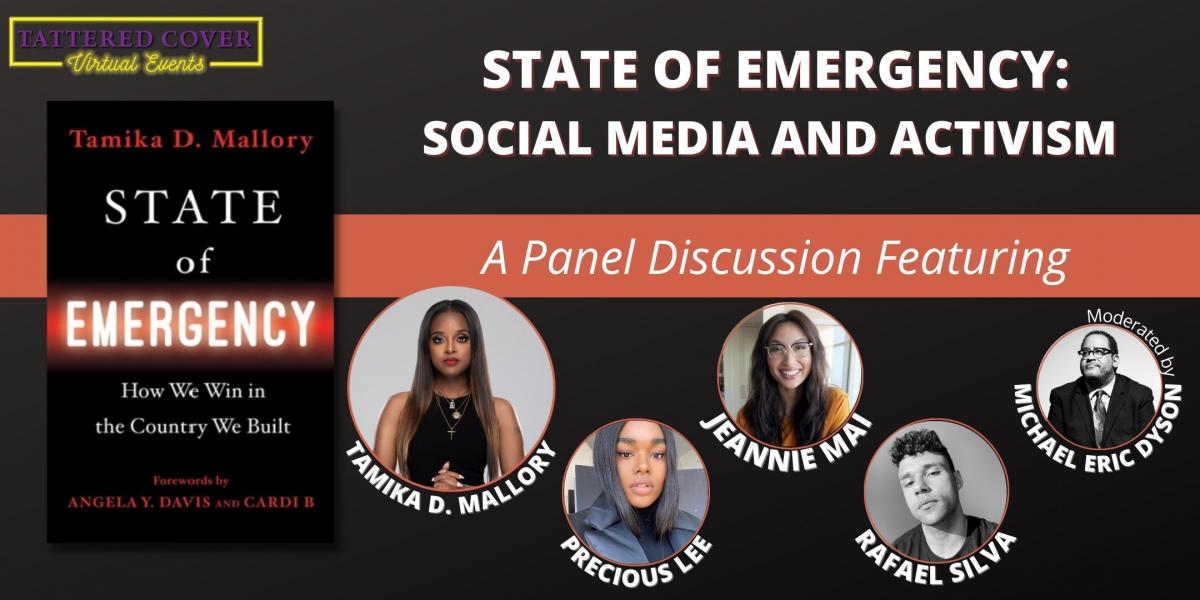 Join Tatter Cover for an special and live virtual event with social justice activist and author Tamika D. Mallory, as she discusses the fight for equality in her new book, STATE OF EMERGENCY: How We Win in the Country We Built. Tamika will be joined by special guests: Jeannie Mai, Rafael Silva, Precious Lee and moderated by Dr. Michael Eric Dyson. Collectively, the roundtable will debate the idea of “Social Media as Activism”. The cost of the event includes a signed copy of the book + shipping & handling and a $5 donation to Until Freedom, an organization on the frontlines fighting for justice and focusing on police accountability and criminal justice reform.

TAMIKA D. MALLORY is a trailblazing social justice leader, movement strategist, globally recognized civil rights activist, co-founder Until Freedom and the historic Women’s March, and author of STATE OF EMERGENCY. She served as the youngest ever Executive Director of the National Action Network. Her speech in the wake of the murder of George Floyd in Minneapolis, MN--entitled State of Emergency--was dubbed “the speech of a generation” by ABC News. Mallory is an expert in the areas of gun violence prevention, criminal justice reform, and grassroots organizing. Please follow Tamika Mallory on 1.1M IG, 157K Twitter or 81.3K FB or Until Freedom on 341K IG, 13.5K Twitter or 21K FB.

Emmy-Award winning host Jeannie Mai can be seen each weekday on the nationally syndicated talk show “The Real”.  In 2018, Mai and her fellow “The Real” co-hosts received a Daytime Emmy Award for Outstanding Talk Show Host. The show, which is in its seventh season, has received multiple Daytime Emmy nominations for Outstanding Talk Series, and received an NAACP Image Award for Outstanding Talk Series. Mai serves as a sideline correspondent for ABC’s extreme mini-golf competition series “Holey Moley” and recently competed on season 29 of the hit series “Dancing with the Stars”. In addition, Mai hosts the YouTube and podcast series “Hello Hunnay” and “Listen Hunnay”. In 2017, Mai executive produced “Stopping Traffic: The Movement to End Sex Trafficking,” a documentary that investigates the international crisis of human sex trafficking from a deeply personal point of view. She is currently working on the follow up, “Stopping Traffic: The Movement to End Sex Trafficking,” due out in 2022.

As the first Black curve model to appear on the pages of American Vogue, Precious Lee is the epitome of a trailblazer. A fierce advocate for race and size diversity across fashion, television, and film, she continues to transform the industry through her work as a model, actress, writer, and activist. After going to an open call with a friend, Precious launched her modeling career in Atlanta at the age of 18. “I’m a size 14 and 16, and being the black, darker-skinned, bigger girl in the fashion industry is something that clearly makes me unique,” Precious said. “I’m doing this to make people who look like me see me in this light and succeeding. I want people to realize that someone like me in the fashion industry should be normal.” Since then, Precious’s career has skyrocketed. She has walked the runway at both New York and Milan Fashion Weeks with brands like Versace, Michael Kors, and Christian Siriano. She has been featured on the covers of high fashion publications such as Harper's Bazaar, V Magazine, Vogue Italia, and British Vogue, and she has been shot by American Vogue, Love Magazine, Glamour, Essence, Paper Magazine and M Le Monde. She has also worked with some of the most notable photographers in the industry, including Steven Meisel, Inez & Vinoodh, Cass Bird, Victor Demarchelier, Ethan James Green, and Juergen Teller. Most recently, Precious has garnered national attention being featured in luxury brand campaigns such as Versace, Area Couture, Marina Rinaldi, Miu Miu’s Wonderwoman Capsule and Marc Jacobs’ Perfect Fragrance. She also partnered with the brand Fleur du Mal to bring size inclusivity to luxury lingerie. As Precious describes it, “I’ve fought for women for years in fashion with the intention of one day seeing projects just like this one. Now women of larger sizes have access to a luxury brand that includes lingerie and clothing. It’s a huge win for the plus-sized community, it’s unprecedented—and it’s only the beginning.”

Rafael Silva is originally from Belo Horizonte, Minas Gerais, Brazil, but moved to the United States at the age of 13. Best known for his role as Carlos Reyes on Ryan Murphy’s hit FOX series “9-1-1: LONE STAR,” Rafael plays a gay police officer opposite Ronen Rubinstein. The actors’ on-screen chemistry has prompted the popular nickname “Tarlos” across social media. The dynamic of having a same-sex relationship between two first responders is not only a progressive narrative on TV, but also one many loyal viewers are responding to with supportive enthusiasm and gratitude. In addition to “9-1-1 LONE STAR”, Rafael can be seen in “Madam Secretary” and Fluidity. In 2017, Rafael graduated Pace University with a B.F.A. in Acting for Film, Television, Voice-Overs & Commercials.

Michael Eric Dyson is one of the nation’s most renowned professors, gifted writers, inspiring preachers, knowledgeable lecturers and prominent media personalities. As a teacher who earned a PhD in Religion from Princeton University, Dyson has taught at some of the nation’s most distinguished universities. He is presently Distinguished University Professor of African American and Diaspora Studies, College of Arts & Science at Vanderbilt University. Dyson is one of America’s premier public intellectuals and author of over 23 books, including seven New York Times bestsellers. As a preacher and sometime pastor for more than 40 years, Dyson has mounted many of the nation’s most noted pulpits to deliver sermons, including, most recently, the Washington National Cathedral where Martin Luther King, Jr., delivered his last Sunday sermon. Dyson has lectured across the country, and around the world, in many of the best colleges and universities, and in public theaters and auditoriums, and for many corporations and unions. He has also served for the last 30 years as a media commentator – and occasionally host – on every major radio and television show. Dyson has even found time to make guest appearances on scripted cable and network television programs such as Soul Food, The Game and Black-ish.

-- Tickets are $35.00 which includes a copy of State of Emergency, media mail shipping to an address in the United States, access to the live stream and a $5 donation to Until Freedom.

-- Attendees will be sent a link to join the live stream at least 30 minutes prior of the event via email.

-- International Shipping is NOT available for this event