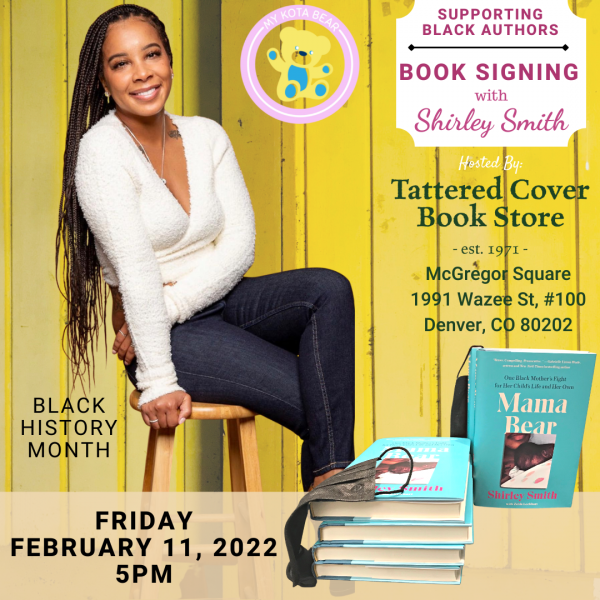 Tattered Cover is pleased to present a signing with Shirley Smith! The author will be signing her book Mama Bear on Friday, February 11th at our McGregor Square location at 5pm MT! This is a free event. Masks are required for guests.

In this moving memoir, Shirley Smith, wife of NBA Champion and All-Star J. R. Smith, tells the story of giving birth to one of the youngest premature babies to survive—using her experience to heighten awareness of the crisis of Black maternal and infant health and pay tribute to Black women’s resilience.

Shirley Smith and her husband, NBA champion J. R. Smith, looked forward to the birth of their second child, Dakota, as they celebrated New Year’s Eve with family at home. After dinner, Shirley felt a sharp pain that worsened through the night. Only 21-weeks pregnant, she was in labor. Mama Bear is the story of her 141-day ordeal, from entering a hospital emergency room on New Year’s morning and giving birth to her premature newborn, to taking her daughter home for the first time the following May.

In telling her story, written with Zelda Lockhart, Shirley shines a spotlight on the dangers Black women face during pregnancy. Black mothers are twice as likely as their white counterparts to go into labor prematurely and lose their babies—and almost four times as likely to die giving birth. Neither socioeconomic status nor access to quality healthcare seem to matter. Tennis champion Serena Williams experienced life-threatening complications during childbirth, and Beyoncé suffered toxemia with her premature twins.

Shirley chronicles the emotional and physical battle she and J. R. endured to save their daughter, and her continual struggles to support her family while nurturing herself. Like many Black women, Shirley was raised to believe that pain is a sign of weakness. The one who kept it together for everybody, she had always put herself second. She parallels this difficult journey to her childhood growing up with an addict mother, and having to raise herself and her brother from a very young age.

Shirley Smith is CEO of My Kota Bear, a non-profit organization that brings awareness and support to NICU (Neonatal Intensive Care Unit) families. She travels and speaks on issues of Black female mortality and premature births to educate and encourage parents and offer guidance to women who have struggled with postpartum depression. She lives in New Jersey with her family.

Mama Bear: One Black Mother's Fight for Her Child's Life and Her Own (Hardcover)