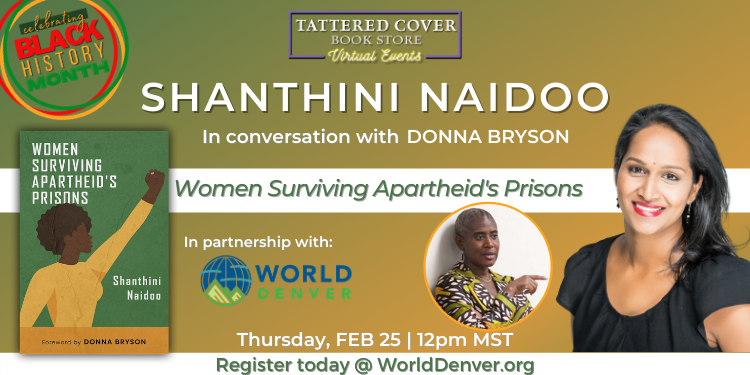 A Look Into Women's Reactions to Injustice; A History Book Talk

Tattered Cover and World Denver welcome author Shanthini Naidoo as she discusses her latest book, Women Surviving Apartheid's Prisons, on Thursday February 25th at 12:00pm MT. She will be in conversation with local author Donna Bryson.

In 1969, South Africa’s apartheid government arrested anti-apartheid leaders and activists nationwide for a key planned show trial. Among them were seven women, three of whom (including Winnie Madikizela-Mandela) have since died. This book by South African journalist Shanthini Naidoo uses rich interview material to share the previously unknown stories of the four imprisoned women who are still living: Joyce Sikhakhane-Rankin, Rita Ndzanga, Shanthie Naidoo, and Nondwe Mankahla. These four freedom fighters were held in solitary confinement for more than a year and subjected to brutal torture in a bid to force them to testify against their comrades. But they refused to do so, which forced the whole trial effort to collapse. Women Surviving Apartheid’s Prisons explores how women from different oppressed communities in South Africa defied traditional gender expectations and played a key role in the overthrow of Apartheid.

Author Shanthini Naidoo is a former journalist on South Africa’s Sunday Times who now works in content marketing. She has also worked for The TimesO magazine. Naidoo lives in Johannesburg with her husband and two daughters. Foreword writer Donna Bryson’s rich career as a foreign correspondent culminated in service as AP’s bureau chief in South Africa, 2008-12. Her first book, It’s a Black-White Thing, explored how students in post-Apartheid South Africa dealt with their many remaining race issues. Her second book, Home of the Brave, describes how a small Colorado town created a welcoming community for war veterans. She lives in Denver.