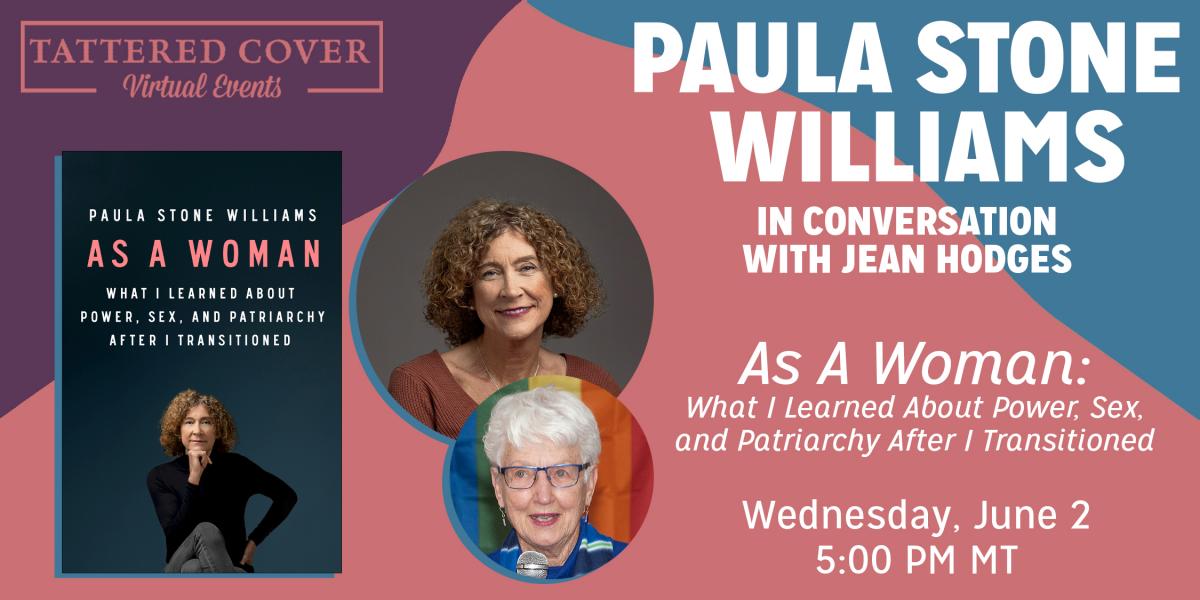 Insight Into the Gendered Landscape of Our Society; A Memoir Book Talk

Tattered Cover welcomes Dr. Paula Stone Williams on Wednesday June 2nd at 5pm MT to discuss her new book, As A Woman. She will be in conversation with Jean Hodges.

As a father of three, married to a wonderful woman, and holding several prominent jobs within the Christian community, Dr. Paula Stone Williams made the life-changing decision to physically transition from male to female at the age of sixty. Almost instantly, her power and influence in the evangelical world disappeared and her family had to grapple with intense feelings of loss and confusion.

Feeling utterly alone and at a loss after being expelled from the evangelical churches she had once spearheaded, Paula struggled to create a new safe space for herself where she could reconcile her faith, her identity, and her desire to be a leader. Much to her surprise, the key to her new career as a woman came with a deeper awareness of the inequities she had overlooked before her transition. Where her opinions were once celebrated and amplified, now she found herself sidelined and ignored. New questions emerged. Why are women’s opinions devalued in favor of men’s? Why does love and intimacy feel so different? And, was it possible to find a new spirituality in her own image?

In As a Woman, Paula pulls back the curtain on her transition journey and sheds light on the gendered landscape that impacts many in the LGBTQ+ community. She urges men to recognize the ways in which the world is tilted in their favor and validates the experiences of women who have been disregarded based solely on their gender, while also acknowledging how she was once like those men who are blind to their privilege. With equal parts humility and confidence, Paula shares her lived experience of both genders and offers a truly unique perspective on the universal struggle to understand what it means to be male, female, and simply, human.

Jean Hodges is a mother, retired educator and theatre director, community organizer, citizen lobbyist for equality, and advocate for LGBTQ+ inclusion in her Boulder faith community. In l993 she and her husband helped to found the Boulder chapter of PFLAG which is the oldest national family organization serving LGBTQ individuals and families with over 200 chapters across the United States. It supports, educates, and advocates for lesbian, gay, bisexual and transgender equality. She rose through the PFLAG ranks, from chapter leader to Colorado state coordinator to regional director of five Mountain States. After becoming chair of the Regional Directors Council and Vice-President of the National Board of Directors, Jean served as national president and board chair. During her many years on the PFLAG National Board, Jean took a leading role in the support, education and advocacy for the transgender/nonbinary community. She was the executive producer of the educational film, “Faces and Facets of Transgender Experience”.