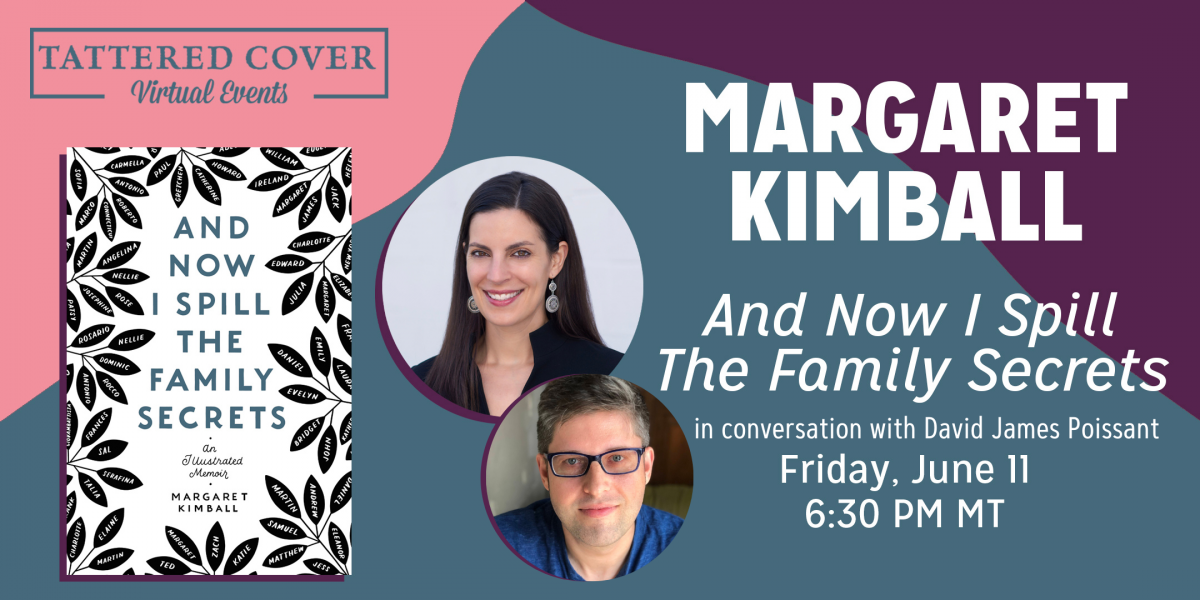 Tattered Cover welcomes author Margaret Kimball on Friday June 11th at 6:30pm MT to discuss her new book, And Now I Spill the Family Secrets. She will be in conversation with David James Poissant.

In 1988, when Kimball is only four years old, her mother attempts suicide on Mother’s Day—and this becomes one of many things Kimball’s family never speaks about. As she searches for answers nearly thirty years later, Kimball embarks on a thrilling visual journey into the secrets her family has kept for decades.

Using old diary entries, hospital records, home videos, and other archives, Margaret pieces together a narrative map of her childhood—her mother’s bipolar disorder, her grandmother’s institutionalization, and her brother’s increasing struggles—in an attempt to understand what no one likes to talk about: the fractures in her family.

Both a coming-of-age story about family dysfunction and a reflection on mental health, AND NOW I SPILL THE FAMILY SECRETS is funny, poignant, and deeply inspiring in its portrayal of what drives a family apart and what keeps them together.

Margaret Kimball is an illustrator and writer whose graphic essays have appeared in Ecotone, Black Warrior Review, Copper Nickel, DIAGRAM, and other outlets. Her work has been listed as Notable in Best American Comics and she's been in residence at both Yaddo and MacDowell artists’ colonies. Her illustrations have appeared in Smithsonian Magazine, Bravery, the Boston Globe, and many major publications. She lives with her family in Indianapolis.

DAVID JAMES POISSANT is the author of the story collection The Heaven of Animals, in print in five languages, winner of the GLCA New Writers Award and a Florida Book Award, longlisted for the PEN/Robert W. Bingham Prize, and a finalist for the Los Angeles Times Book Prize. His debut novel, Lake Life, was published by Simon & Schuster in 2020. His stories and essays have appeared in The American Scholar, The Atlantic Monthly, The Chicago Tribune, The New York Times, One Story, Ploughshares, The Southern Review, and in numerous anthologies including New Stories from the South, Best New American Voices, and Best American Experimental Writing. A recipient of scholarships and fellowships from the Bread Loaf, Sewanee, Tin House, Wesleyan, and Longleaf writers’ conferences, he teaches in the MFA program at the University of Central Florida and lives in Orlando with his wife and daughters.