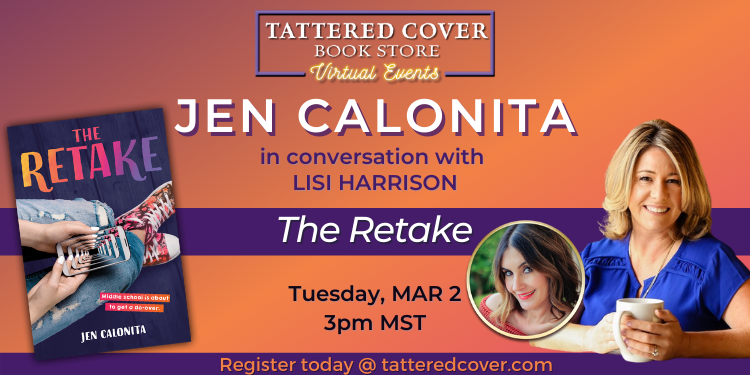 Tattered Cover welcomes author Jen Calonita on Tuesday March 2nd at 3pm MT to discuss her new book, The Retake, which can be purchased below. She will be in conversation with Lisi Harrison.

The Retake by Jen Calonita- CLICK HERE TO PURCHASE YOUR COPY

Zoe knows that the only thing harder than middle school is losing a best friend. She and Laura used to do everything together from taking silly selfies, to joining all the same clubs together and even throwing surprise birthday parties for one another. But lately things have been weird between them. Now Laura will post a photo of her hanging out with other girls before responding to Zoe's simple text. She doesn't even want to sit with her at lunch anymore. Zoe is heartbroken--all she wants is for things to go back to normal. But then a magical app downloads on her phone...and things get even weirder! Suddenly Zoe can travel back in time to moments where her and Laura started drifting apart. It is like a dream come true. A chance for Zoe to mend their friendship. But as Zoe goes back to moments of middle school drama--sleepover games gone wrong, field trips with cliques and crushes, and school projects that bring on more-than-awkward encounters--she realizes that second chances don't always go as planned and that sometimes you need to trust the magic of new beginnings. The Retake is a picture-perfect look at tween friendship, that also explores more serious themes of social media pressure, bullying and what it means to be yourself.

Jen Calonita got her start in entertainment journalism (where she got to interview people like Dwayne 'The Rock' Johnson and Zac Efron). The job eventually inspired her first series, Secrets of My Hollywood Life. Over the last fifteen years, she's written more than two dozen books about young Hollywood celebrities, kids at sleepaway camp, a girl on the road with her favorite boy band and several books about kids at Fairy Tale Reform School and Royal Academy as well as the Twisted Tale books Conceal, Don't Feel and Mirror Mirror.

Lisi Harrison worked at MTV Networks in New York City for twelve years. She left her position as senior director of development in 2003 to write The Clique series which sold more than eight million copies and has been on the New York Times bestseller list for more than two hundred weeks, with ten titles hitting #1 and foreign rights sold in thirty-three countries. The Alphas was a #1 New York Times bestseller, and Monster High was an instant bestseller. Her latest YA series is the Pretenders and her first adult novel, The Dirty Book Club came out in 2017. She is launching two new Middle Grade series in 2021. Girl Stuff in February and The Pack in June. Lisi lives in Laguna Beach, California, and really wants a massage.