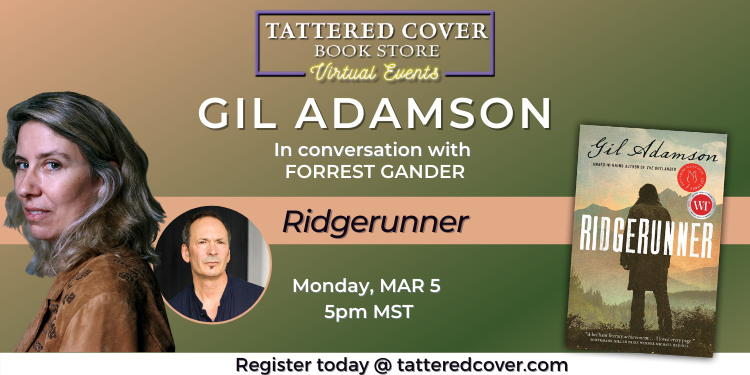 A Literary Western Set in the Early 1900s; A Fiction Book Talk

Tattered Cover welcomes author Gil Adamson on Monday March 1st 5pm MT to discuss her new book, Ridgerunner which can be purchased below. She will be in conversation with Forrest Gander.

Ridgerunner by Gil Adamson - CLICK HERE TO PURCHASE YOUR COPY

November 1917. William Moreland is in mid-flight. After nearly twenty years, the notorious thief, known as the Ridgerunner, has returned. Moving through the Rocky Mountains and across the border to Montana, the solitary drifter, impoverished in means and aged beyond his years, is also a widower and a father. And he is determined to steal enough money to secure his son's future.

Twelve-year-old Jack Boulton has been left in the care of Sister Beatrice, a formidable nun who keeps him in cloistered seclusion in her grand old house. Though he knows his father is coming for him, the boy longs to return to his family's cabin, deep in the woods. When Jack finally breaks free, he takes with him something the nun is determined to get back -- at any cost.

Set against the backdrop of a distant war raging in Europe and a rapidly changing landscape in the West, Gil Adamson's follow-up to her award-winning debut, The Outlander, is a vivid historical novel that draws from the epic tradition and a literary Western brimming with a cast of unforgettable characters touched with humour and loss, and steeped in the wild of the natural world.

GIL ADAMSON is the critically acclaimed author of Ridgerunner, which won the Writers’ Trust Fiction Prize, was a finalist for the Scotiabank Giller Prize, and was named a best book of the year by the Globe and Mail and the CBC. Her first novel, The Outlander, won the Dashiell Hammett Prize for Literary Excellence in Crime Writing, the Amazon.ca First Novel Award, the ReLit Award, and the Drummer General’s Award. It was a finalist for the Commonwealth Writers’ Prize, CBC Canada Reads, and the Prix Femina in France; longlisted for the International IMPAC Dublin Literary Award; and chosen as a Globe and Mail and Washington Post Top 100 Book. She is also the author of a collection of linked stories, Help Me, Jacques Cousteau, and two poetry collections, Primitive and Ashland. She lives in Toronto.

Forrest Gander, born in the Mojave Desert, lives in California. A translator and multi-genre writer with degrees in geology and literature, he’s the recipient of numerous awards, among them the Pulitzer Prize, the Best Translated Book Award, and fellowships from the Library of Congress, the Guggenheim, and United States Artists Foundations. His most recent title is Twice Alive.