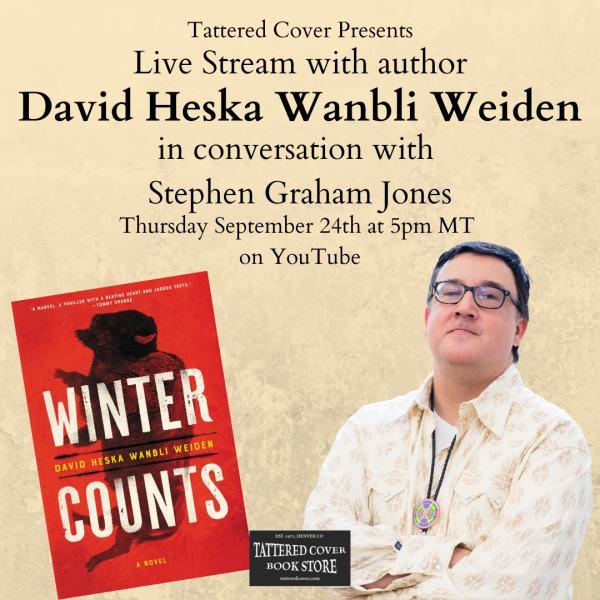 "A gripping OWN Voices mystery set on a South Dakota reservation, that leads our hero all the way to Denver, right to Colfax Ave! It'll keep you on the edge of your seat the whole time, flipping pages until you get to the shocking ending." -Mikaley Osley, Director of Marketing and Events

Virgil Wounded Horse is the local enforcer on the Rosebud Indian Reservation in South Dakota.  When justice is denied by the American legal system or the tribal council, Virgil is hired to deliver his own punishment, the kind that’s hard to forget. But when heroin makes its way into the reservation and finds Virgil’s nephew, his vigilantism suddenly becomes personal. He enlists the help of his ex-girlfriend and sets out to learn where the drugs are coming from, and how to make them stop.

They follow a lead to Denver and find that drug cartels are rapidly expanding and forming new and terrifying alliances. And back on the reservation, a new tribal council initiative raises uncomfortable questions about money and power. As Virgil starts to link the pieces together, he must face his own demons and reclaim his Native identity. He realizes that being a Native American in the twenty-first century comes at an incredible cost.

Winter Counts is a tour-de-force of crime fiction, a bracingly honest look at a long-ignored part of American life, and a twisting, turning story that’s as deeply rendered as it is thrilling.

David Heska Wanbli Weiden, an enrolled member of the Sicangu Lakota nation, is the author of the novel Winter Counts (Ecco/HarperCollins, 2020) and the children’s book Spotted Tail (Reycraft, 2019), winner of the 2020 Spur Award from the Western Writers of America and finalist for the Colorado Book Awards. His work appears in the New York Times, Shenandoah, Yellow Medicine Review, Transmotion, the Criminal Class Review, and other magazines. He’s the recipient of a MacDowell Colony Fellowship, a Ragdale Foundation residency, the PEN America Writing for Justice Fellowship, and was a Tin House Scholar. He received his MFA from the Institute of American Indian Arts, and is professor of Native American studies at Metropolitan State University of Denver.

The Only Good Indians (Hardcover)