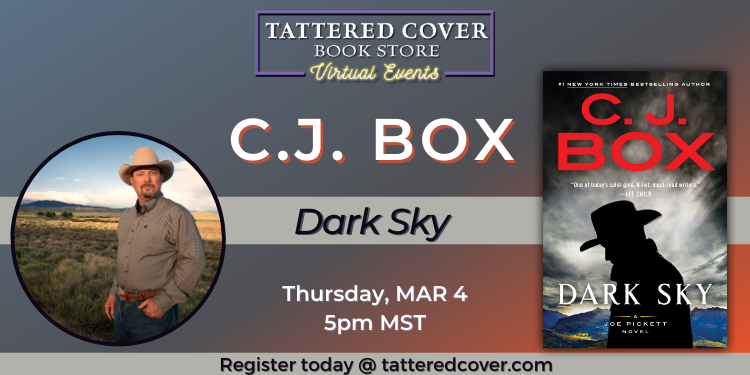 Head Back to Wyoming with This New Tale; A Mystery Book Talk

Tattered Cover welcomes author C.J. Box on Thursday March 4th at 5pm MT to discuss his new book, Dark Sky, which can be purchased below. He will be in conversation with Lisa Casper.

C. J. Box is the #1 New York Times-bestselling author of twenty Joe Pickett novels; seven stand-alone novels, including The Bitterroots; and the story collection Shots Fired. He has won the Edgar, Anthony, Macavity, Gumshoe, and two Barry awards, the 2010 Mountains &amp; Plains Independent Booksellers Association Award for fiction as well as the French Prix Calibre. 38 and a French Elle magazine literary award. He was awarded the 2016 Western Heritage Award for Literature by the National Cowboy Museum and the Spur Award from Western Writers of America for Best Contemporary Novel. Over seven million copies of his books have been sold in the U.S. and abroad. His books have been translated into thirty languages and have been optioned for film and television. A television series adapted from Box’s Cassie Dewell novels by David E. Kelly, “Big Sky,” will premiere in November on ABC. A Wyoming native, Box has also worked on a ranch and as a small-town newspaper reporter and editor. He and his wife, Laurie, live on their ranch in Wyoming.