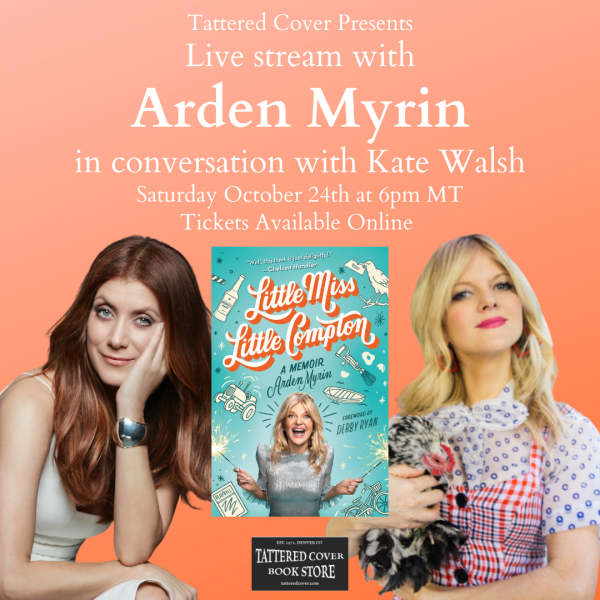 A Hilarious New Book from a Hilarious Actress; A Memoir Book Talk

Arden Myrin is the product of not one, but two hasty decisions. Her paternal grandparents ran off and got married twenty-four hours after they met. Arden's parents did one better -- they married on a dare. Growing up in Arden's family, her dad ate nothing but sheet cake, while her mom was busy teaching a Cub Scout troop how to put on a Broadway musical. Oh, and she grew up in a small farm town called Little Compton, Rhode Island. Human population: 3,518. Cow population: 278. General Store: One. Stop Lights: Zero.

At nineteen, Arden packed her bags with stars in her eyes and landed at ImprovOlympic in Chicago, where for the first time in her life she felt like she finally made sense. After drinking in as much comedy experience (and Sea Breezes) as she could, Arden got her big break when she was cast on an NBC sitcom. She moved to Los Angeles, knowing no one, and quickly realized she had no clue how to be a fully-grown human adult on her own.

How do you date someone and not ruin it? How do you interact with people if you have a teeny bit of social anxiety? How do you stand up for yourself if you're a people pleaser? And most of all, how do you start to believe that you are enough?

From small town Rhode Island to accidentally kicking Courteney Cox in the face on a soundstage in Hollywood, Arden's hilarious, inspiring, and honest story shows readers how one totally unconventional upbringing might be the very thing one needs to thrive, all while showing up as your most outrageous, authentic self. Shout out to Little Compton!! Woot Woot!!!

Actress, writer and comedian Arden Myrin was most recently a cast member on the hit Netflix series Insatiable (named one of the ten most binged shows on Netflix), playing the role of Regina Sinclair. Recently, Arden was a cast member on Showtime’s Shameless (Season 7) playing the part of Dollface Dolores. She appeared on Chelsea Lately over 100 times and was a regular panelist on @Midnight. She hosts Will You Accept This Rose? a popular iHeartRadio comedy podcast about The Bachelor franchise.

Her television credits include Orange is The New Black, Insecure, The Goldbergs, Grey’s Anatomy, Key and Peele, Inside Amy Schumer, The Magicians, and Fresh Off the Boat among others. She has appeared on The Howard Stern Show, Conan, RuPaul’s Drag Race and more. Moreover, she was a cast member of MadTV for the final four seasons, and headlines as a stand up at comedy clubs all over the country, as well as at comedy festivals including SXSW, San Francisco Sketchfest, Moontower, Outsidelands Music and Comedy Festival, Women in Comedy Festival, Wild West Comedy Festival, and more.

Join us on Saturday October 24th at 6pm MT as Arden Myrin is in conversation with actress, Kate Walsh (Grey's Anatomy, Umbrella Academy).

-- Tickets are $31.00 (plus tax and convenience fee), include a copy of Little Miss Little Compton, shipping and handling to an address in the continental United States, and a link to the live stream.

--If you request that the book to be sent to an address outside of the continental U.S., then you are subject to be charged additional shipping fees