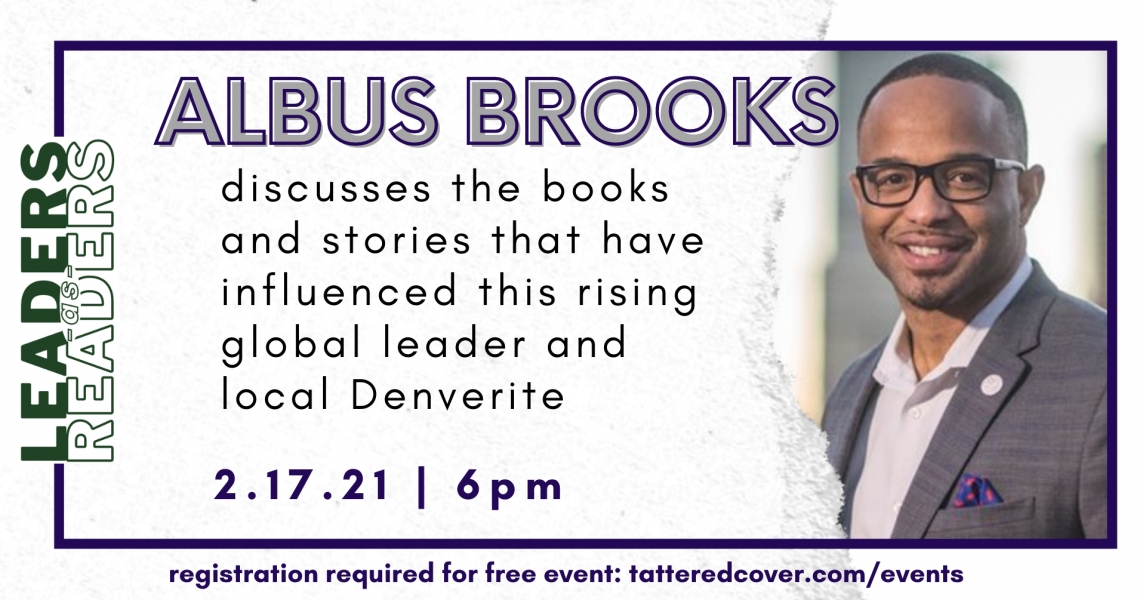 Tattered Cover welcomes Albus Brooks on Wednesday February 17th at 6pm MT as a part of our Leaders as Readers series.

Tattered Cover introduces a literary event series for readers by readers. Readers are leaders in the community and literature has touched the lives of many in a variety of ways. We want to celebrate those stories that have influenced us, taught us, helped us grow, challenged us and changed us. Inviting local, influential members of our community, we want to talk to them about books and stories. What was the book that made them fall in love with reading? Where’s your favorite place to read? What book has changed your life? What books do you recommend everyone read at least once? All of these questions and more are answered as we go beyond the surface, dive into the magic of books, and authentically engage with the community through the best way we know how: stories.

At the core of Albus Brooks’ identity is community development and servant leadership. Albus moved to Colorado in 1997 to study and play football for the University of Colorado. Sports Illustrated named him one of the Top 10 Hardest Hitters, and the NFL took interest in him before injuries ultimately ended his football career.

Albus Brooks pursued his calling for community development by working with young people in Denver’s poor communities. He served as the Director of the Issachar Center for Urban Leadership, an organization that invests in Denver’s emerging leaders. In 2010 Albus worked to elect then-Mayor John Hickenlooper as Governor of Colorado, acting as the statewide Outreach and Political Director. This exposure to political leadership led him to seek public office, and in 2011 Albus defeated 38 opponents to become the youngest African American ever elected to Denver City Council. Serving two terms on Denver City Council, including two terms as Council President, Albus accomplished an ambitious range of progressive legislative victories with the goal of building a truly inclusive city.

To address the affordability crisis, he co-created Denver’s first - and Colorado’s largest - affordable housing fund. To make Denver a more equitable place to grow up he funded and expanded the Denver Preschool Program, providing universal access to preschool for all 4-year-olds. He also decriminalized marijuana possession for those 18-21 years old, preventing thousands of young people from entering the criminal justice system.

Albus Brooks received his M.B.A. from the University of Denver. He is now the Vice President of Business Development and Strategy for Milender White, a Development and Construction firm operating in Southern California and Colorado. Albus sits on multiple boards and commissions and has been a part of the following national and international fellowship programs: The Marshall Memorial Fellowship, the NewDEAL Leaders, and the Aspen Institute-Rodel Fellowship.

Although a rising global leader, it is in the heart of Denver where Albus feels most at home. He lives in the Cole neighborhood with his wife Debi and their three young children, Makai, Kenya and Kaya.