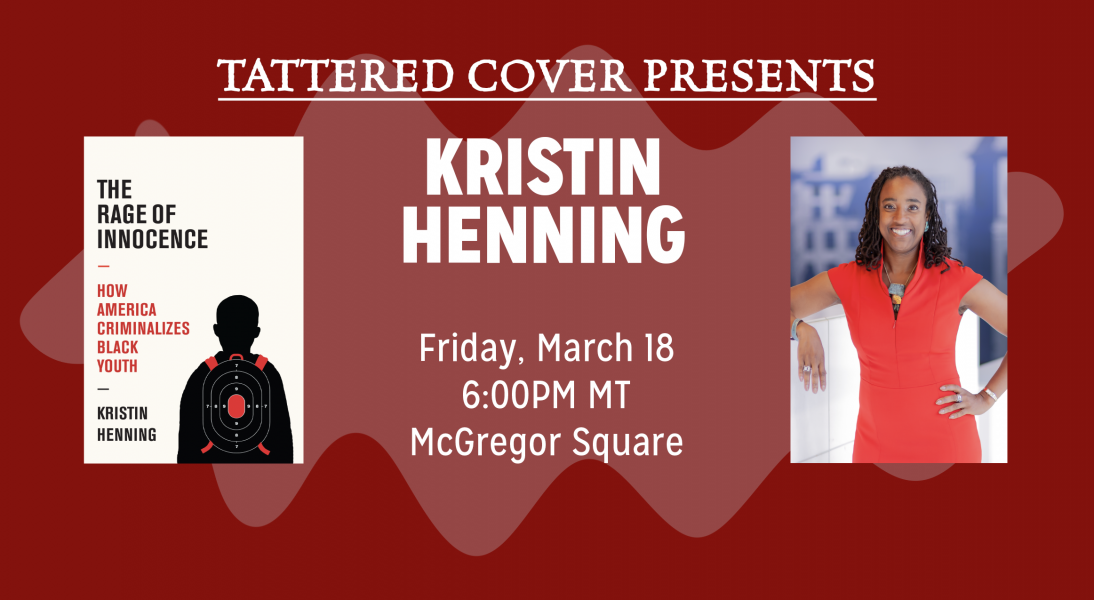 The Hue-Man Experience at Tattered Cover is pleased to wlecome Kristin Henning to our McGregor Square location on March 18th at 6pm to discuss her book The Rage of Innocence: How America Criminalizes Black Youth. This is a free, non-ticketed event.

A brilliant analysis of the foundations of racist policing in America: the day-to-day brutalities, largely hidden from public view, endured by Black youth growing up under constant police surveillance and the persistent threat of physical and psychological abuse

Henning explains how discriminatory and aggressive policing has socialized a generation of Black teenagers to fear, resent, and resist the police, and she details the long-term consequences of rac­ism that they experience at the hands of the police and their vigilante surrogates. She makes clear that unlike White youth, who are afforded the freedom to test boundaries, experiment with sex and drugs, and figure out who they are and who they want to be, Black youth are seen as a threat to White Amer­ica and are denied healthy adolescent development. She examines the criminalization of Black adoles­cent play and sexuality, and of Black fashion, hair, and music. She limns the effects of police presence in schools and the depth of police-induced trauma in Black adolescents.

Especially in the wake of the recent unprece­dented, worldwide outrage at racial injustice and inequality, The Rage of Innocence is an essential book for our moment.

KRISTIN HENNING is a nationally recognized trainer and consultant on the intersection of race, adolescence, and policing. She is the Blume Professor of Law and director of the Juvenile Justice Clinic and Initiative at the Georgetown University Law Center; from 1998 to 2001 she was the lead attorney of the Juvenile Unit at the Public Defender Service for the District of Columbia. Awards she has received include the 2021 Leadership Prize from the Juvenile Law Center and the 2013 Robert E. Shepherd, Jr. Award for Excellence in Juvenile Defense from the National Juvenile Defender Center.

The Rage of Innocence: How America Criminalizes Black Youth (Hardcover)