John Hendrickson in Conversation with John Wenzel at Colfax 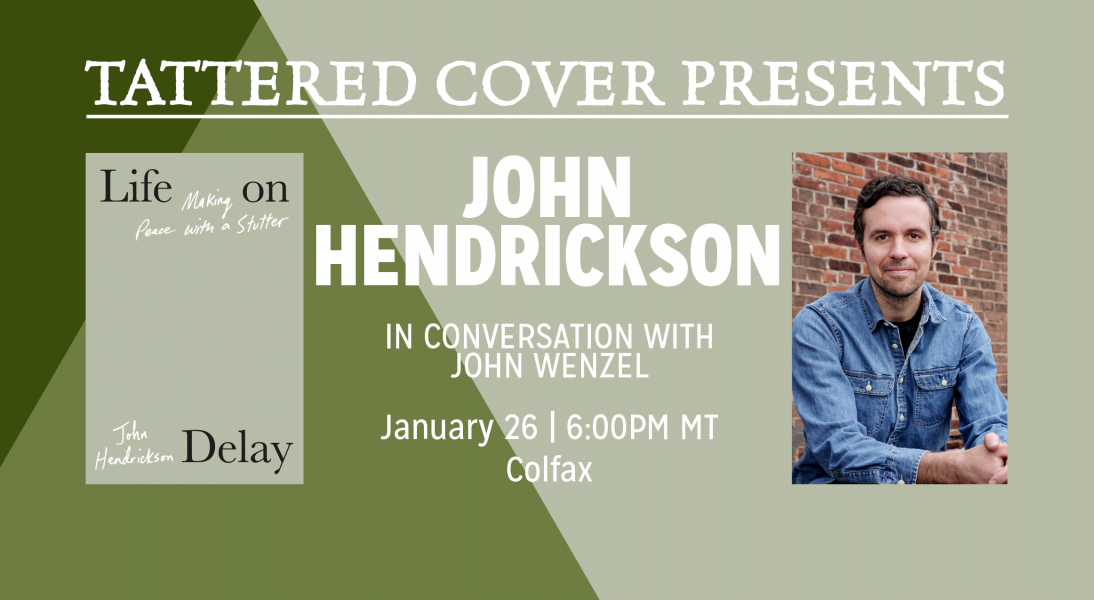 Join Tattered Cover as we welcome John Hendrickson as he celebrates his new book Life on Delay: Making Peace with a Stutter. He will be in conversation with John Wenzel. This event is free and open to the public. We encourage you to order the book online here or pick it up at the event!

An intimate, candid memoir about learning to live with—rather than “overcome”—a stutter. • "Recounts how a boy mocked for his stutter ended up as a professional communicator, illuminating along the way a world few of us understand.”—Nicholas Kristof, coauthor of Half the Sky

"Hendrickson...pulls the reader into his world with the ease of Joan Didion and Susan Sontag.”—Douglas Brinkley, author of Silent Spring Revolution

In the fall of 2019, John Hendrickson wrote a groundbreaking story for The Atlantic about Joe Biden’s decades-long journey with stuttering, as well as his own. The article went viral, reaching readers around the world and altering the course of Hendrickson’s life. Overnight, he was forced to publicly confront an element of himself that still caused him great pain.

He soon learned he wasn’t alone with his feelings: strangers who stutter began sending him their own personal stories, something that continues to this day. Now, in this reported memoir, Hendrickson takes us deep inside the mind and heart of a stutterer as he sets out to answer lingering questions about himself and his condition that he was often too afraid to ask.

In Life on Delay, Hendrickson writes candidly about bullying, substance abuse, depression, isolation, and other issues stutterers like him face daily. He explores the intricate family dynamics surrounding his own stutter and revisits key people from his past in unguarded interviews. Readers get an over-the-shoulder view of his childhood; his career as a journalist, which once seemed impossible; and his search for a romantic partner. Along the way, Hendrickson guides us through the evolution of speech therapy, the controversial quest for a “magic pill” to end stuttering, and the burgeoning self-help movement within the stuttering community. Beyond his own experiences, he shares portraits of fellow stutterers who have changed his life, and he writes about a pioneering doctor who is upending the field of speech therapy.

Life on Delay is an indelible account of perseverance, a soulful narrative about not giving up, and a glimpse into the process of making peace with our past and present selves.

JOHN HENDRICKSON is a senior editor at The Atlantic. He previously wrote and edited for Rolling Stone, Esquire, and The Denver Post. His Atlantic feature “What Joe Biden Can’t Bring Himself to Say” was named one of the best stories of 2019 by Longform. He lives in New York City with his wife.

JOHN WENZEL is an A&E reporter and arts critic for The Denver Post who covers movies, music, comedy and the performing arts. He's the author of the nonfiction book "Mock Stars" and has written for The Atlantic, Rolling Stone, Esquire, Vulture and others.

Life on Delay: Making Peace with a Stutter (Hardcover)