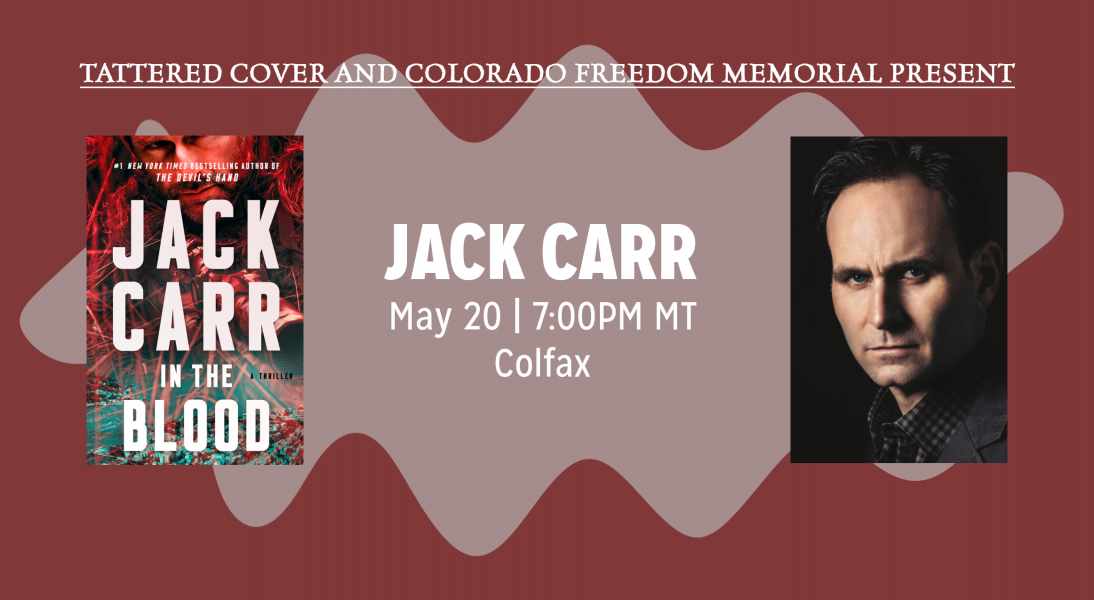 Tattered Cover is pleased to partner with the Colorado Freedom Memorial to bring Jack Carr to our Colfax location on Friday, May 20th at 7pm. Jack Carr will be introduced by KOA radio host Ross Kaminsky!

This is a ticketed event. Each ticket will come with a copy of Jack Carr's latest book In the Blood! There is also an option for two seats with one book.

​“Take my word for it, James Reece is one rowdy motherf***er. Get ready!” —Chris Pratt, star of The Terminal List, coming to Amazon Prime

A woman boards a plane in the African country of Burkina Faso having just completed a targeted assassination for the state of Israel. Two minutes later, her plane is blown out of the sky.

Over 6,000 miles away, former Navy SEAL James Reece watches the names and pictures of the victims on cable news. One face triggers a distant memory of a Mossad operative attached to the CIA years earlier in Iraq—a woman with ties to the intelligence services of two nations…a woman Reece thought he would never see again.

Reece enlists friends new and old across the globe to track down her killer, unaware that he may be walking into a deadly trap.

Jack Carr is a #1 New York Times bestselling author and former Navy SEAL. He lives with his wife and three children in Park City, Utah. He is the author of The Terminal List, True Believer, Savage Son, and The Devil’s Hand. He is also the host of the Danger Close Podcast. Visit him at OfficialJackCarr.com and follow along on Instagram, Twitter, and Facebook at @JackCarrUSA.

ABOUT THE COLORADO FREEDOM MEMORIAL

The Colorado Freedom Memorial is a glass-walled memorial dedicated to Honoring, Educating and Remembering the Fallen from Colorado who gave their lives on battlefields since we became a state.  We also pay tribute to the families of these heroes, The Gold Star Mothers, Fathers, and families who we hold close and to whom we promise, we will never forget. Please consider donating to the Memorial here.