Evette Dionne in conversation with Julia E. Torres at Colfax 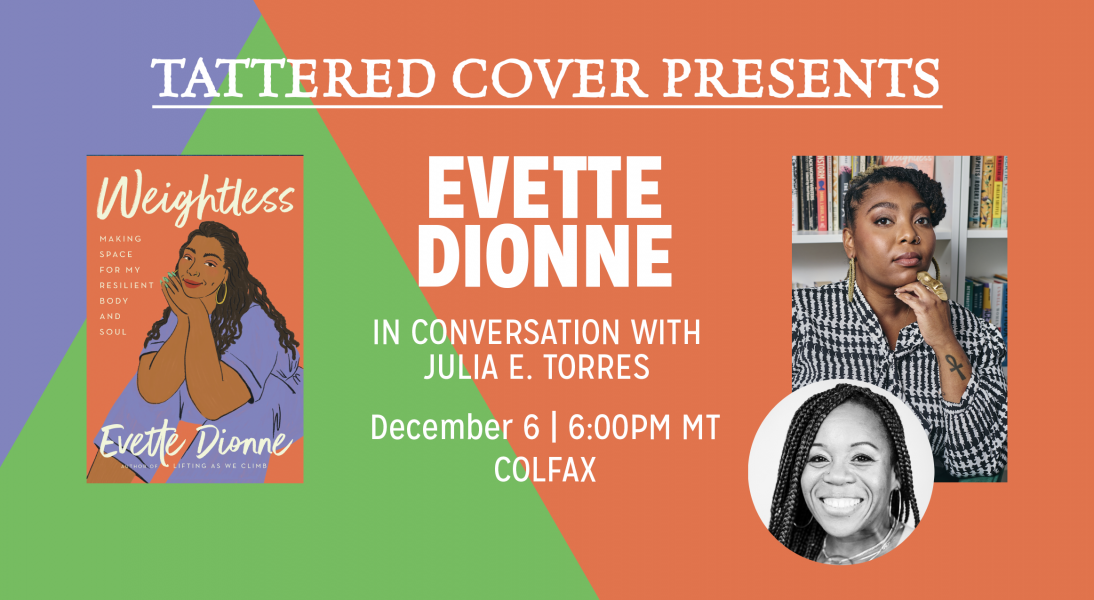 Tattered Cover is honored to present Evette Dionne in conversation with Julia E. Torres on December 6th at 6:00pm at our Colfax location. The two will be discussing Dionne's new book Weightless: Making Space for My Resilient Body and Soul! This event is free and open to the public.

My body has not betrayed me; it has continued rebounding against all odds. It is a body that others map their expectations on, but it has never let me down.

In this insightful, funny, and whip-smart book, acclaimed writer Evette Dionne explores the minefields fat Black woman are forced to navigate in the course of everyday life. From her early experiences of harassment to adolescent self-discovery in internet chatrooms to diagnosis with heart failure at age twenty-nine, Dionne tracks her relationships with friendship, sex, motherhood, agoraphobia, health, pop culture, and self-image.

Along the way, she lifts back the curtain to reveal the subtle, insidious forms of surveillance and control levied at fat women: At the doctor’s office, where any health ailment is treated with a directive to lose weight. On dating sites, where larger bodies are rejected or fetishized. On TV, where fat characters are asexual comedic relief. But Dionne’s unflinching account of our deeply held prejudices is matched by her fierce belief in the power of self-love.

An unmissable portrait of a woman on a journey toward understanding our society and herself, Weightless holds up a mirror to the world we live in and asks us to imagine the future we deserve.

Evette Dionne is a journalist, editor, and culture critic. She is the former editor in chief of Bitch Media and the current executive editor of YES! Media. Lifting as We Climb: Black Women’s Battle for the Ballot Box, Dionne’s middle-grade nonfiction book about Black women suffragists, was nominated for a National Book Award and won a Coretta Scott King author honor. She lives in Denver with her partner and her two pets and they are likely listening to Beyoncé right now.

Julia E. Torres is a nationally recognized veteran language arts teacher-librarian in Denver, Colorado. Julia facilitates teacher development workshops rooted in the areas of anti-racist education, equity and access in literacy and librarianship, and education as a practice of liberation. Julia's work has been featured on NPR, AlJazeera’s The Stream, PBS Education, KQED’s MindShift, Rethinking Schools, Learning for Justice Magazine, and many more. She is a current Amelia Elizabeth Walden Book Award committee member, a member of both the Book Love Foundation and ALAN boards of directors, an Educolor Steering committee member, a The Educator Collaborative Book Ambassador, and a co-founder of #DisruptTexts.

Weightless: Making Space for My Resilient Body and Soul (Hardcover)