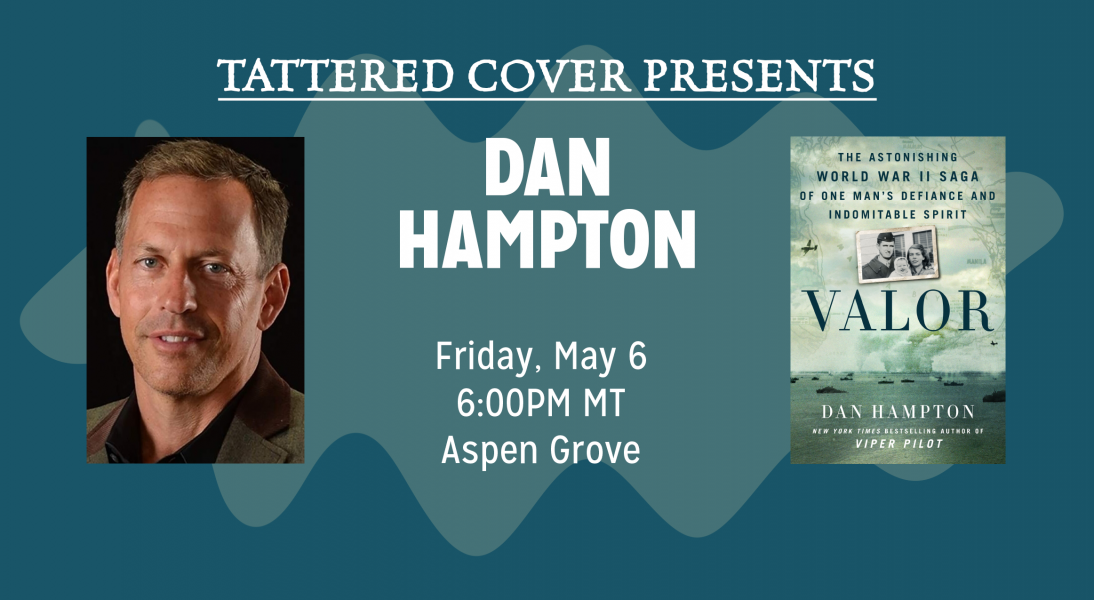 Tattered Cover is pleased to welcome Dan Hampton to celebrate his book Valor! He will be at our Aspen Grove location on May 6th at 6pm MT. This is a free, nonticketed event. Masks are required.

Valor is the magnificent story of a genuine American hero who survived the fall of the Philippines and brutal captivity under the Japanese, from New York Times bestselling author Dan Hampton.

Lieutenant William Frederick “Bill” Harris was 25 years old when captured by Japanese forces during the Battle of Corregidor in May 1942. This son of a decorated Marine general escaped from hell on earth by swimming eight hours through a shark-infested bay; but his harrowing ordeal had just begun.

Shipwrecked on the southern coast of the Philippines, he was sheltered by a Filipino aristocrat, engaged in guerilla fighting, and eventually set off through hostile waters to China. After 29 days of misadventures and violent storms, Harris and his crew limped into a friendly fishing village in the southern Philippines. Evading and fighting for months, he embarked on another agonizing voyage to Australia, but was betrayed by treacherous islanders and handed over to the Japanese. Held for two years in the notorious Ofuna prisoner-of-war camp outside Yokohama, Harris was continuously starved, tortured, and beaten, but he never surrendered. Teaching himself Japanese, he eavesdropped on the guards and created secret codes to communicate with fellow prisoners. After liberation on August 30, 1945, Bill represented American Marine POWs during the Japanese surrender in Tokyo Bay before joining his father and flying to a home he had not seen in four years.

Valor is a riveting new look at the Pacific War. Through military documents, personal photos, and an unpublished memoir provided by his daughter, Harris’ experiences are dramatically revealed through his own words in the expert hands of bestselling author and retired fighter pilot Dan Hampton. This is the stunning and captivating true story of an American hero.

Lieutenant Colonel (Ret.) Dan Hampton flew 151 combat missions during his twenty years (1986–2006) in the United States Air Force. For his service in the Iraq War, Kosovo conflict, and first Gulf War, Col. Hampton received four Distinguished Flying Crosses with Valor, a Purple Heart, eight Air Medals with Valor, five Meritorious Service medals, and numerous other citations. He is a graduate of the USAF Fighter Weapons School, USN Top Gun School (TOGS), and USAF Special Operations School. A frequent guest analyst on CNN, Fox News, and MSNBC discussing foreign affairs, military, aviation, and intelligence issues, he has published in Aviation History, the Journal of Electronic Defense, Air Force Magazine, Vietnam magazine, and Airpower magazine, and written several classified tactical works for the USAF Weapons Review. He is the author of the national bestsellers Viper Pilot and Lords of the Sky, as well as a novel, The Mercenary.