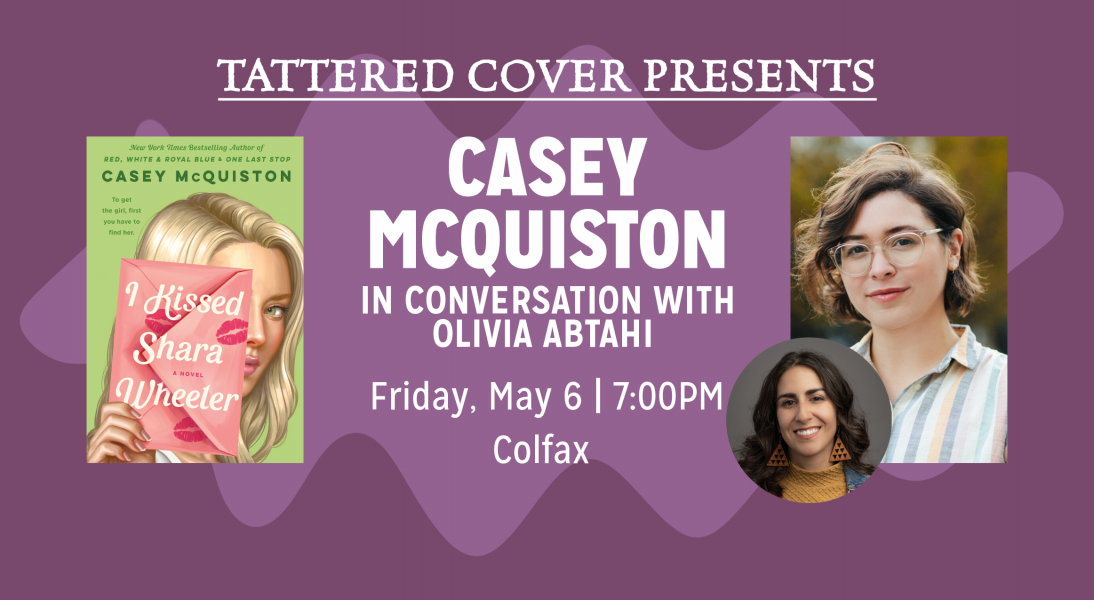 Tattered Cover is pleased to welcome Casey McQuiston to our Colfax location on May 6th at 7pm MT to celebrate their new book I Kissed Shara Wheeler!  They will be in conversation with Denver's very own Olivia Abtahi. A signing line will follow the conversation and audience Q&A!

This is a ticketed event. You will receive a copy of I Kissed Shara Wheeler in addition to a seat at the event. Masks are required.

Casey McQuiston is the New York Times bestselling author of One Last Stop, Red, White & Royal Blue, and I Kissed Shara Wheeler, as well as a pie enthusiast. Born and raised in southern Louisiana, Casey now lives in New York City with Pepper, a poodle mix and semipro personal assistant.

Growing up in the DC area, Olivia Abtahi devoured books and hid in empty classrooms during school to finish them. Her debut novel, Perfectly Parvin, was published in 2021 by Penguin Random House Putnam Books For Young Readers, receiving starred reviews from Booklist, School Library Journal, and Best of 2021 lists from the Chicago and New York Public Library systems. Her sophomore novel, Azar on Fire, will be published in August 2022, with her middle grade debut in 2023. She currently lives in Denver, Colorado, with her husband and daughter.

From the New York Times bestselling author of One Last Stop and Red, White & Royal Blue comes a debut YA romantic comedy about chasing down what you want, only to find what you need...

Chloe Green is so close to winning. After her moms moved her from SoCal to Alabama for high school, she’s spent the past four years dodging gossipy classmates and the puritanical administration of Willowgrove Christian Academy. The thing that’s kept her going: winning valedictorian. Her only rival: prom queen Shara Wheeler, the principal’s perfect progeny.

But a month before graduation, Shara kisses Chloe and vanishes.

On a furious hunt for answers, Chloe discovers she’s not the only one Shara kissed. There’s also Smith, Shara’s longtime quarterback sweetheart, and Rory, Shara’s bad boy neighbor with a crush. The three have nothing in common except Shara and the annoyingly cryptic notes she left behind, but together they must untangle Shara’s trail of clues and find her. It’ll be worth it, if Chloe can drag Shara back before graduation to beat her fair and square.

Thrown into an unlikely alliance, chasing a ghost through parties, break-ins, puzzles, and secrets revealed on monogrammed stationery, Chloe starts to suspect there might be more to this small town than she thought. And maybe—probably not, but maybe—more to Shara, too.

Fierce, funny, and frank, Casey McQuiston's I Kissed Shara Wheeler is about breaking the rules, getting messy, and finding love in unexpected places.