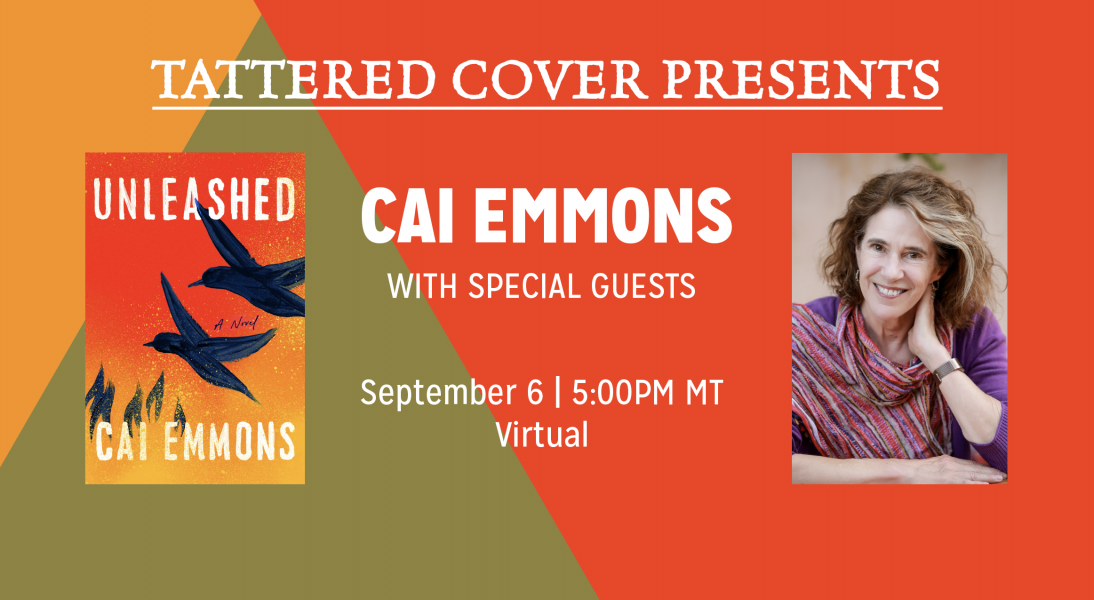 Tattered Cover is pleased to virtually welcome Cai Emmons to celebrate the launch of her book Unleashed! This virtual event will take place via YouTube Live on September 6th at 5:00pm MT

Set amid California’s wildfire season, a vivid and magical novel following a family in crisis thrust on a collision course with the world around them that has an outcome beyond their wildest imaginings . . .

When Lu and George Barnes drop their only daughter, Pippa, off at college, they return to their Sonoma home to find that their paths have diverged. Confronted with an empty nest, Lu’s increasing dissatisfaction with their materialistic lives becomes impossible to ignore. She is most content outdoors, finding the animals in her backyard far superior company to her pretentious neighbors. In contrast, George is eager to throw himself into his business, a local winery with an elite clientele, as well as his art collection. He cannot for the life of him understand his wife’s discontent.

Meanwhile, Pippa feels completely adrift at school in the bustle of LA—its unfamiliar noises, its unfriendly atmosphere. She finds comfort only in the beloved family cat she’s brought with her and in her zoology class, which makes the world seem just a bit brighter. As Lu, George, and Pippa struggle to adapt, growing apart in the process, tensions outside the family are mounting as well; women have been disappearing across the country with no worldly explanation, all while California’s wildfire season is swiftly approaching, bringing with it a reckoning that none of the Barneses can avoid.

At once a grounded story about love and family, and a transcendent tale about the power of nature, Unleashed is a stunning look at what matters in an all too chaotic world, the things that sustain us when we are on the verge of losing it all, and how we might find ourselves in the most unexpected of ways.

Cai Emmons is the author of six novels—His Mother’s Son, The Stylist, Weather Woman, Sinking Islands, Unleashed, and Livid—and a story collection, Vanishing. She holds a BA from Yale University and two MFAs, one from New York University in film and the other from the University of Oregon in fiction. Before turning to fiction, Emmons wrote plays and screenplays. Winner of a Student Academy Award, an Oregon Book Award, and the Leapfrog Global Fiction Prize, and finalist for the Narrative, The Missouri Review, and the Sarton awards, she has taught at a variety of institutions, most recently in the creative writing program at the University of Oregon. She lives in Eugene, Oregon.