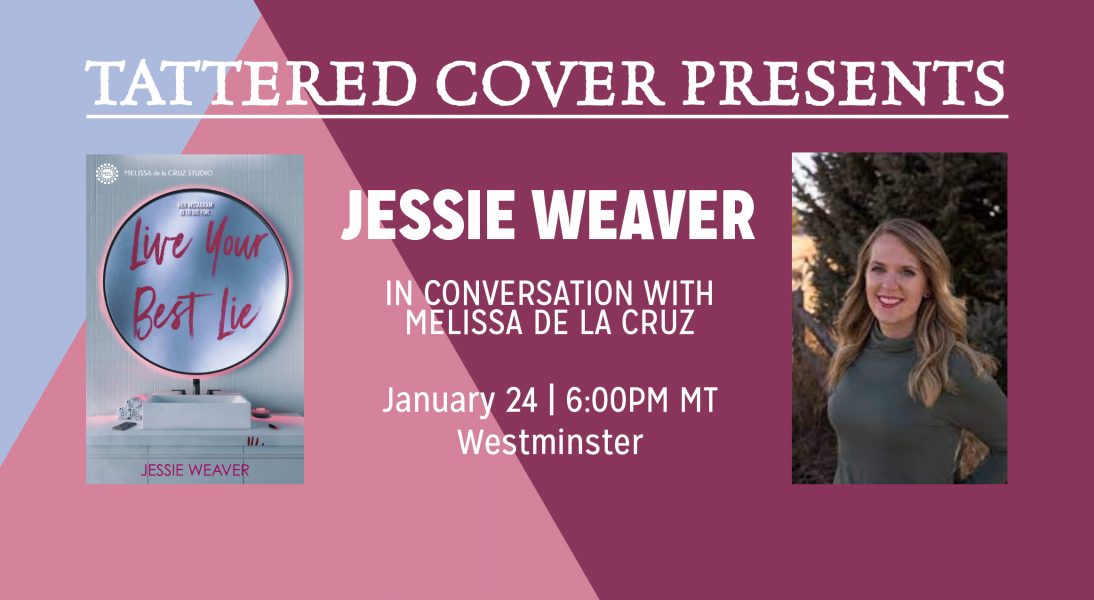 Join Tattered Cover as we welcome Jessie Weaver to our Westminster as she launches her book Live Your Best Lie! This event will take place on January 24th at 6pm. Jessie will be in conversation with Melissa de la Cruz.

This is a free event, but registration is required. You can RSVP at the bottom of this page.

Social media influencer Summer Cartwright leads a very charmed life: millions of followers, the hottest designer and vintage clothes at her fingertips, a newly minted book deal, the coolest friends, and, until recently, the hottest boyfriend at her über-elite prep school. Every moment of her life has been carefully planned and cultivated to complement her “imperfectly perfect” social media persona. She is truly #LivingHerBestLife.

But when Summer goes missing during her annual Halloween party and then an unscheduled post appears on her feed stating that she’ll be dead within the next five minutes, those closest to Summer know something isn’t quite right—or on-brand. Grace, Summer’s camera-shy best friend; Adam, Summer’s gamer ex-boyfriend; Laney, Summer’s moody camp roommate; and Cora, an influencer wannabe, all decide to investigate. And when they come upon Summer’s lifeless body, they soon realize that no filter is strong enough to mask the lies we tell ourselves.


Told in multiple POVs interspersed with social media posts and flashbacks, Live Your Best Lie has twists and turns that will keep readers turning the page and no one will be able to guess the ending.

Before writing about flawed, funny teens with big hearts, Jessie Weaver spent ten years teaching them English. She completed the Stanford University online novel writing program in 2019. Though she’s an East Coast girl at heart, originally from Baltimore, MD, she currently lives just outside Denver, Colorado with her husband and two daughters. Live Your Best Lie is her first novel.

Melissa de la Cruz is the #1 New York Times bestselling author of many critically acclaimed and award-winning novels for readers of all ages, including her most recent hits: Disney's Descendants series; the Blue Bloods series; the Witches of East End series (which was adapted into a two-season television drama on Lifetime); Alex & Eliza: A Love Story; Something in Between; and Pride and Prejudice and Mistletoe. Melissa is the co-director of YALLFest (Charleston, South Carolina) and the co-founder of YALLWest (Santa Monica, California). She grew up in Manila and she now lives in West Hollywood, California, with her husband and daughter. Learn more at melissa-delacruz.com.

Live Your Best Lie (Like Me Block You) (Hardcover)