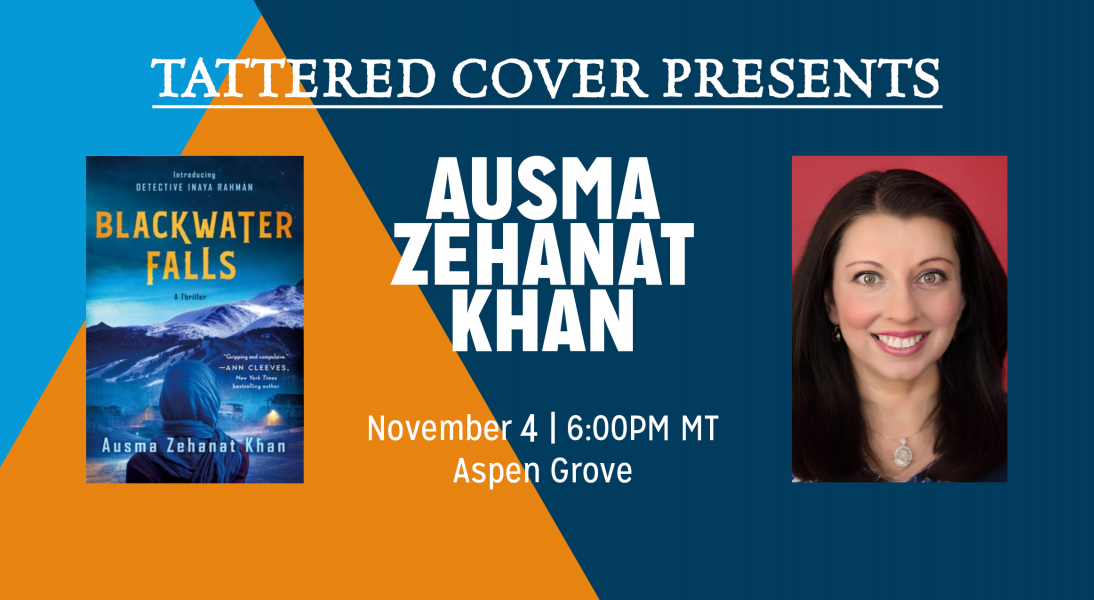 Tattered Cover is pleased to welcome Ausma Zehanat Khan to our Aspen Grove location on November 4th at 6pm. She will be celebrating the release of her book Blackwater Falls. There will be a reading, Q&A, and signing. This is a free event and open to the public.

“A gripping and compulsive mystery, but much more than that: an exploration of faith, prejudice and fear of the unknown.” —Ann Cleeves, New York Times bestselling author of the Vera, Shetland and Two Rivers series

Girls from immigrant communities have been disappearing for months in the Colorado town of Blackwater Falls, but the local sheriff is slow to act and the fates of the missing girls largely ignored. At last, the calls for justice become too loud to ignore when the body of a star student and refugee--the Syrian teenager Razan Elkader--is positioned deliberately in a mosque.

Detective Inaya Rahman and Lieutenant Waqas Seif of the Denver Police are recruited to solve Razan’s murder, and quickly uncover a link to other missing and murdered girls. But as Inaya gets closer to the truth, Seif finds ways to obstruct the investigation. Inaya may be drawn to him, but she is wary of his motives: he may be covering up the crimes of their boss, whose connections in Blackwater run deep.

Inaya turns to her female colleagues, attorney Areesha Adams and Detective Catalina Hernandez, for help in finding the truth. The three have bonded through their experiences as members of vulnerable groups and now they must work together to expose the conspiracy behind the murders before another girl disappears.

Delving deep into racial tensions, and police corruption and violence, Blackwater Falls examines a series of crimes within the context of contemporary American politics with compassion and searing insight.

AUSMA ZEHANAT KHAN holds a Ph.D. in international human rights law with a specialization in military intervention and war crimes in the Balkans. She is the author of the award-winning Esa Khattak and Rachel Getty mystery series, which begins with The Unquiet Dead, as well as the critically acclaimed Khorasan Archives fantasy series. Her new crime series featuring Detective Inaya Rahman begins with Blackwater Falls. She is also a contributor to the anthologies Private Investigations, Sword Stone Table, and The Perfect Crime, and the former Editor-in-Chief of Muslim Girl magazine. A British-born Canadian and former adjunct law professor, Khan now lives in Colorado with her husband