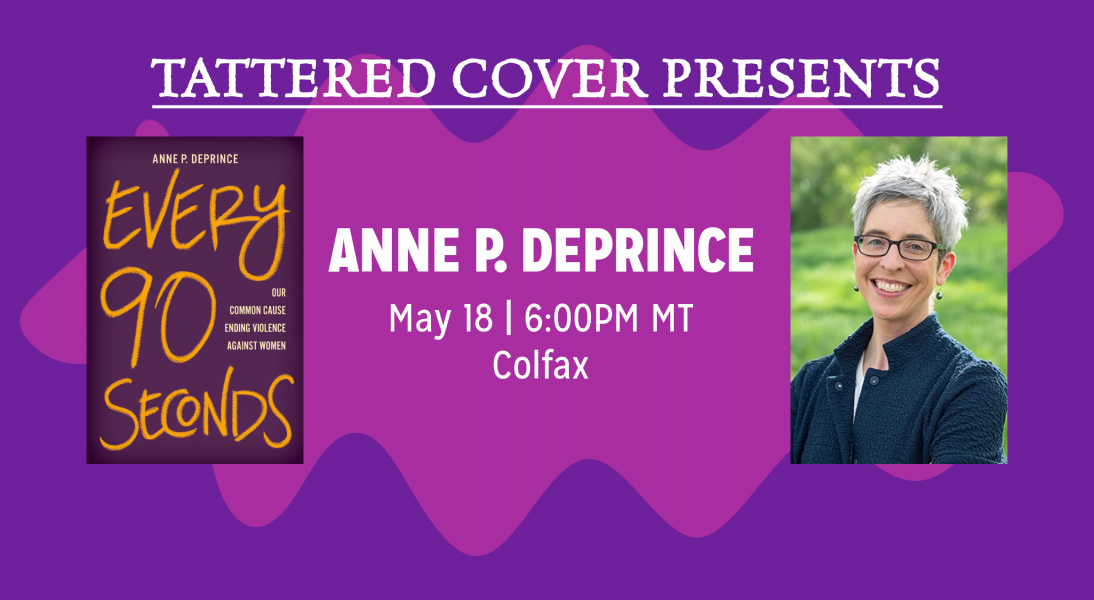 Tattered Cover is pleased to welcome Anne DePrince to our Colfax location on May 18th at 6pm to discuss her book Every 90 Seconds: Our Common Cause Ending Violence Against Women. This is a free, nonticketed event.

An urgent examination of how violence against women is inextricably linked to other issues that stoke our greatest passions.

Every 90 seconds a woman is sexually assaulted. In that same minute and a half, another is a victim of domestic violence at the hands of a current or former intimate partner. Every sixteen hours, one of those intimate partners shoots and kills a woman. Nearly two in ten women are stalked, while one in sixteen is raped during her first sexual experience. Despite these jaw-dropping statistics, collectively we are well practiced at seeing such acts as someone else's problem. And yet, violence against women is tangled up with the most frequently discussed and debated issues of our time: healthcare and education access, immigration, gun policies, economic security, and criminal justice reform-issues that impact us all, nearly every day.

In Every 90 Seconds, Anne P. DePrince argues that to end violence against women, we must fundamentally redefine how we engage with it-starting by abandoning the idea that violence is a problem involving only those who abuse or are abused. Instead, DePrince illuminates how violence against women is inextricably linked to other issues that stoke our greatest passions. For instance, each time a woman requires emergency medical attention as a result of violence and abuse, our overburdened healthcare system bears an entirely preventable cost. Meanwhile, the threat of violence is a significant cause of pressure on the US southern border, driving women and their families to seek safety far from home. Violence against women also takes a stunning toll on the US economy by contributing to widespread poverty. Drawing on these and other complex examples, DePrince builds the case that this very complexity offers an opportunity for mobilizing ordinary people to work to stop violence against women in a way we never have before. DePrince's call to action arises out of the reality that when we address violence against women, we can make progress on a range of other significant issues that we care deeply about too.

Anne P. DePrince, PhD, has worked closely with victim service providers, police, prosecutors, and policy makers over more than two decades of research. A Distinguished University Professor at the University of Denver and an internationally recognized expert in violence against women, DePrincestudies the impact of multiple forms of violence against women - sexual assault, domestic violence, sex trafficking, adolescent dating violence - on a range of impacts, from health and economic wellbeing to education and safety. The U.S. Department of Justice recognized her contributions to thenation's understanding of crime victims with the Vision 21 Crime Victims Research Award.

Every 90 Seconds: Our Common Cause Ending Violence Against Women (Hardcover)