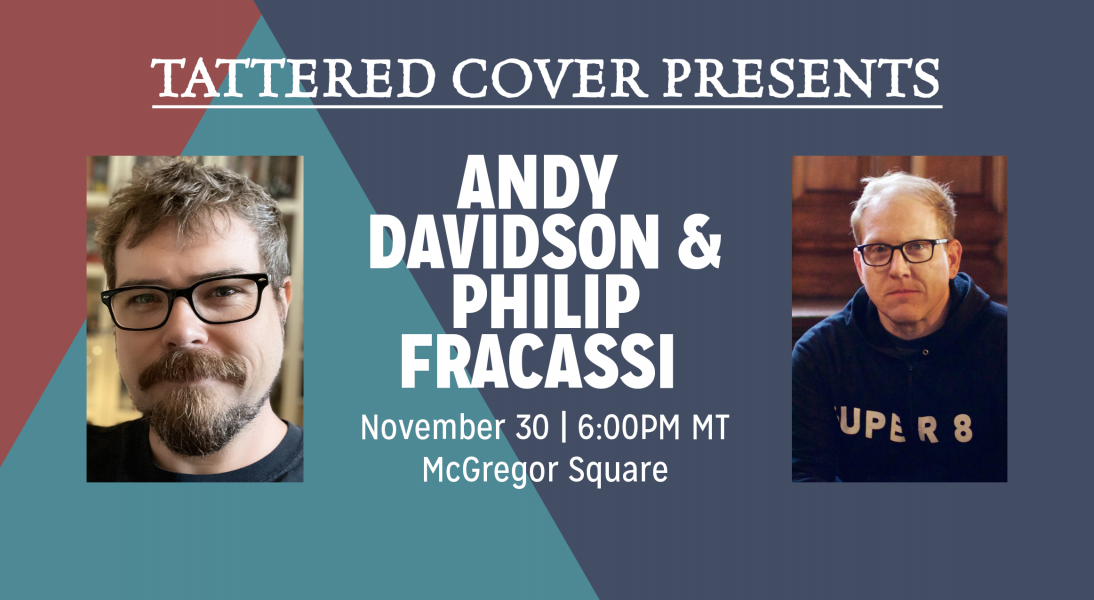 Tattered Cover is proud to present two amazing authors discussing their books with one another. Andy Davidson (The Hollow Kind) and Philip Fracassi (A Child Alone with Strangers) will be at our McGregor Square location on November 30th to discuss their books, chat with readers, and sign copies of The Hollow Kind and A Child Alone with Strangers! This event is free and open to the public.

Andy Davidson is the Bram Stoker Award nominated author of In the Valley of the Sun (Skyhorse) and The Boatman's Daughter (MCD Books), which was listed among NPR's Best Books of 2020, the New York Public Library's Best Adult Books of the Year, and Library Journal's Best Horror of 2020. The Hollow Kind is Davidson's third epic horror novel about a family's battle with a cosmic evil in Empire, Georgia told through two different timelines.(MCD Books). Per The Chicago Tribune, "Davidson, among a burgeoning class of horror writers, finds insidious, Faulkner-like generational squalor in The Hollow Kind, a ghost story about corrupted soil so chilling, it was put down at times just to smile.”

Philip Fracassi is the award-winning author of the story collections, Behold the Void and Beneath a Pale Sky. His acclaimed debut novel, Boys in the Valley will be re-released with Tor Nightfire summer 2023. He is the the author of A Child Alone With Strangers about a kidnapped child whose otherworldly abilities alert him that there is something far more sinister lurking outside the farmhouse he's been imprisoned in, and only he possesses the key to communicate with it (Talos Press), and the forthcoming Gothic, publishing this winter with Cemetery Dance.

The Hollow Kind: A Novel (Hardcover)

A Child Alone with Strangers: A Novel (Hardcover)