Once Upon a Time in Hollywood Lib/E (Compact Disc) 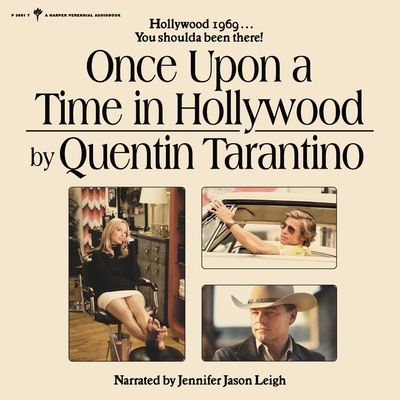 By Quentin Tarantino, Jennifer Jason Leigh (Read by)
$69.99
Special Request - May Not Be Available

Quentin Tarantino's long-awaited first work of fiction is a novel that expands the story told in his Academy Award-winning film, Once Upon a Time in Hollywood.In Once Upon a Time in Hollywood, Quentin Tarantino re-creates the glamorous and gritty heyday of late 60s Hollywood in the weeks leading up to one of the most shocking crimes in modern American history. Revisiting and expanding the story told on film, Tarantino's novel is full of the unusual twists and turns that are a hallmark of his acclaimed storytelling.The story tracks four principal characters both before and after the events of the film: Rick Dalton--Once he had his own TV series, but now Rick's a washed-up villain-of-the week drowning his sorrows in whiskey sours. Will a phone call from Rome save his fate or seal it?Cliff Booth--Rick's stunt double, and the most infamous man on any movie set because he's the only one there who might have got away with murder.Sharon Tate--She left Texas to chase a movie-star dream, and found it. Sharon's salad days are now spent on Cielo Drive, high in the Hollywood Hills.Charles Manson--The ex-con's got a bunch of zonked-out hippies thinking he's their spiritual leader, but he'd trade it all to be a rock 'n' roll star.Vivid, funny, unforgettable, Once Upon a Time in Hollywood teases readers with the imaginative narrative force that makes Tarantino one of a kind.