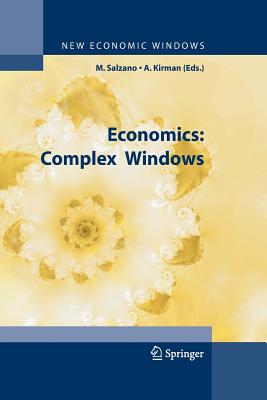 
Available to Order - Usually Arrives in Our Store in 4 to 7 Days
"In some ways, the e?ect of achieving understanding is to reverse completely our initial attitude of mind. For everyone starts (as we have said) by being perplexed by some fact or other: for instance... the fact that the diagonal of a square is incommensurable with the side. Anyone who has not yet seen why the side and the diagonal have no common unit regards this as quite extra- dinary. But one ends up in the opposite frame of mind... for nothing would so much ?abbergast a mathematician as if the diagonal and side of a square were to become commensurable". Aristotele] This is the ?rst volume of a new series entitled "New Economic Windows". Each volume in the series will, we hope, provide pointers towards a better understanding of the nature of economic phenomena and help to "reverse our initial state of mind" as economists. As H. Simon observed, Economics must be considered a "hard", (in the sense of di?cult rather than precise), science. As he cogently argued, the problems dealt with are so complex they "cannot simply be reduced to analytically solvable models or decomposed into sepa- 1 rate sub processes". In this he was following on from Einstein who, many years earlier, when asked why he had not turned his attention to economics said that he found it too di?cult a subject to handle scienti?cally.
General Coordinator of International Master in Economics & Complexity, University of Salerno, University of Barcelona, University of Roskilde, since 2000 General Editor of Economics & Complexity, an Interdisciplinary and International Journal, ISSN 1398-1706 Referee for Wirn-Vietri 1999 Referee for the International Joint Conference on Neural Networks (IJCNN) 2000 Referee for Complexity International Professor of Public Finance, University of Salerno, Faculty of Economics, since 1997/98 Professor of Public Finance, International Master in Economics & Complexity, University of Salerno, Faculty of Economics, since 2001 Professor of Public Finance, University of Calabria, since 1980 to 1997; Lecturer of Thought of Economics history, University of Calabria, since 1989/90 to 1993/94; Lecturer of Public Economics, University of Calabria, since 1994/95 to 1996/97. Visiting Lecturer in Public Finance: Public choice and economics theories - Recent Approaches, University of Roskilde (March-April 1995) (DK), (February-May1996) Guest Lecturer in Public Finance and Transitions economies, University of Roskilde (DK) (april 1996 ). Visiting Lecturer in Public of Economics, University of Nizhni Novgorod (ex U.R.S.S.) since 1993 to 1997; Member of Italian Society of Public Economics- Siep; Member of Italian Society of Economics- Sie Member of Italian Society of Neural Network SIREN (and past component of the directorate) Organiser of Special Section in Economics of the 11th Italian Workshop on Neural Nets Wirn-Vietri99. Scientific Co-ordinator of the High Level Scientific Conference, NEW, New Economic Windows: New Paradigms for the New Millenium, co-financed by European Community, 1999. Scientific Co-ordinator of the ConferenceComplexity Theory in Public Economics: Economic, Financial and Social Aspects, Acquafredda di Maratea, September 1995. Scientific Co-ordinator of I, II and III Summer Schools in Economics and Complexity held in 1995, 1997 and 1999.