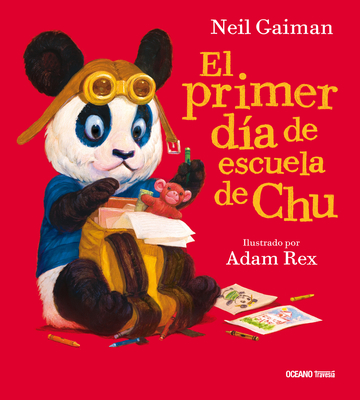 Chu is worried. Today is his first day of school. What is school like? Who are his new classmates? Will they be nice to him?
Neil Gaiman is an author whose awards include the Newbery Medal, the Carnegie Medal, and the Bram Stoker Award. His fantasy novels for adults include American Gods, Neverwhere, and Stardust, as well as the short story anthology Smoke and Mirrors. Coraline is his most acclaimed novel. Adam Rex is an American designer, illustrator, and author. His books Frankenstein Makes a Sandwich, followed by Frankenstein Takes the Cake, which are collections of stories about monsters and their problems, the former of which is a New York Times best-seller.
"Gaiman and Rex expertly blend humor and tension to delicious narrative effect." —Publishers Weekly, starred review, on the English language edition

"A charming title that is sure to leave kids wanting more—more Chu and more readings of this whimsical tale." —School Library Journal, on the English language edition

"Children apprehensive about how their own individualities will be met at school will find raucous, joyful comfort." —Booklist, on the English language edition