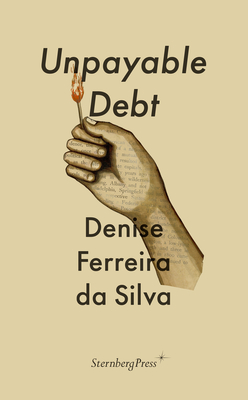 Unpayable Debt examines the relationships among coloniality, raciality, and global capital from a black feminist “poethical” perspective. Inspired by Octavia E. Butler's 1979 sci-fi novel Kindred, in which an African-American writer is transported back in time to the antebellum South to save her owner-ancestor, Unpayable Debt relates the notion of value to coloniality—both economic and ethical. Focusing on the philosophy behind value, Denise Ferreira da Silva exposes capital as the juridical architecture and ethical grammar of the world. Here, raciality—a symbol of coloniality—justifies deployments of total violence to enable expropriation and land extraction.

This is the first volume in the On the Political series.

Denise Ferreira da Silva is Professor and Director of the Institute for Gender, Race, Sexuality, and Social Justice at the University of British Columbia, Vancouver. She is also a Visiting Professor at the School of Law at Birkbeck, University of London.