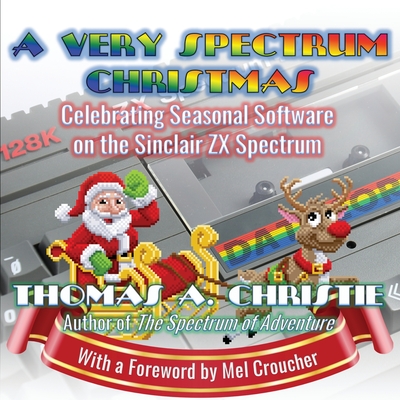 By Thomas A. Christie

Throughout the 1980s, thousands of British children were lucky enough to discover a Sinclair ZX Spectrum under their Christmas trees and soon found their eyes opened to a virtual world of wonder. But Santa Claus did more than deliver computers - sometimes he appeared on them, too.

From the author of "The Spectrum of Adventure" and "A Righteously Awesome Eighties Christmas", this book delves into the Spectrum's extraordinary pantheon of seasonal games: the good, the bad, the surprising, the unabashedly surreal and the occasionally rather tenuous.

From the machine's formative days in the early eighties right through to the latest independent releases, "A Very Spectrum Christmas" takes a look at what makes a truly memorable festive title for the vintage home micro-computer... as well as unearthing a few games that may have become lost in the mists of Christmas past for good reason.

Fully illustrated with colour screenshots of all the games under discussion, "A Very Spectrum Christmas" is a treasure trove of yuletide software experiences-where eighties nostalgia collides with modern day homebrew innovation with frequently unexpected results