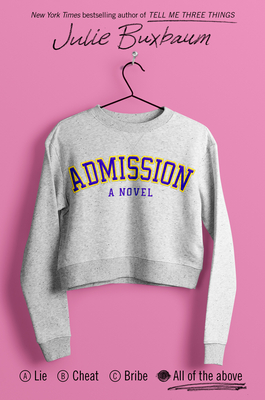 
On Our Shelves Now
Lie. Cheat. Bribe. How far would you go to get into your dream school? How far would your parents go? Inspired by the recent college admissions scandal, this ripped-from-the-headlines novel sees one teenage girl's privileged world shatter when her family's lies are exposed.

It's good to be Chloe Wynn Berringer-she has it all-money, privilege, and a ticket to the college of her dreams. Or at least she did until the FBI came knocking on her front door, guns at the ready, and her future went up in smoke. Now her B list celebrity mother is under arrest in a massive college admissions bribery scandal, and Chloe might be the next one facing charges. The public is furious, the headlines are brutal, and the US attorney is out for blood.

As everything she's taken for granted starts to slip away, Chloe must reckon not only with the truth of what happened, but also with the examination of her own guilt. How much did she really know-or guess? Why did her parents think the only way for her to succeed was to cheat? And what does it really mean to be complicit?

The New York Times bestselling author of Tell Me Three Things takes on the college admissions bribery scandal that rocked the country in this timely tale of the hyper elite and the hyper competitive, and the lengths they go to stay at the top.
JULIE BUXBAUM is the author of the What to Say Next, as well as the New York Times bestseller Tell Me Three Things, her debut young adult novel. She also wrote the critically acclaimed The Opposite of Love and After You. Her work has been translated into twenty-five languages. She lives in Los Angeles with her husband and their two young children.

"Whether or not readers are familiar with the real-life events that inspired the story, they’re likely to find it captivating; the novel goes behind the headlines to add humanity and complexity to a juicy national scandal." —The Horn Book

“An absorbing and topical novel.” —Booklist