The Comic Book Story of Basketball: A Fast-Break History of Hoops (Paperback) 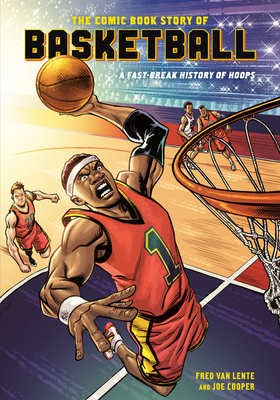 The Comic Book Story of Basketball: A Fast-Break History of Hoops (Paperback)


Available to Order - Usually Arrives in Our Store in 4 to 7 Days
A fast-break history of basketball--from its humble beginnings to its all-time great players--featuring engaging true tales from the court and vivid, dynamic illustrations.

Whether it's millionaire pros facing off in an indoor arena full of screaming fans or a lone kid shooting hoops on an outdoor court, basketball is one of the most popular and widely played sports in the world. The Comic Book Story of Basketball gives you courtside seats to the history of hoops. It chronicles the sport from its beginnings in a YMCA in Massachusetts to its current status as a beloved international game for men and women of all ages. Learn the true stories behind the college game, the street game, the women's game, and the international game, with legendary players and coaches like Dr. J, Michael Jordan, LeBron James, and Steph Curry profiled throughout.
Fred Van Lente specializes in entertaining readers with offbeat histories, with the help of his incredibly talented artists. In addition to his fiction comics like Cowboys & Aliens (upon which the 2011 movie was based), Van Lente has written the multiple-award winning Action Philosophers!, The Comic Book History of Comics, and Action Presidents! (drawn by Ryan Dunlavey). He lives in Brooklyn with his wife, the playwright Crystal Skillman, and some mostly ungrateful cats.

Joe Cooper is an American artist originally from Detroit, Michigan. His art has been published by almost every major American comic book publisher, most notably Marvel, DC, Valiant, Dynamite, Image, and Insight Comics. Outside of comics, he was an illustrator at the venerable skateboard company Powell-Peralta for many years. He is currently living the good life in sunny Southern California with his wife, son, and two needy cats.