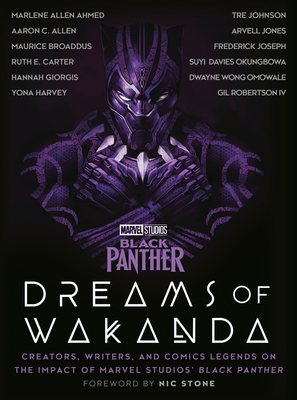 
On Our Shelves Now
Join creators, writers, and comics legends as they discuss the impact of Marvel Studios’ Black Panther in this gorgeously illustrated collection of essays

Marvel Studios’ Black Panther has become more than just a movie—it has shaped conversations about art, culture, science fiction, representation, justice, fashion, comics, creativity, and so much more. Celebrate the legacy of the film with this collection of all-new personal essays and reflections that shed light on its monumental impact, including firsthand stories from artists involved in the film, cultural analysis from journalists and academics, and thoughtful insights from writers and comics legends. Each contributor brings their unique expertise and experience to explore the film’s genesis and significance from every angle. Complete with gorgeous original illustrations, Dreams of Wakanda brings together a wide array of diverse and multifaceted perspectives that exemplify the many ways the film has impacted cinema, culture, and society.

In this collection:
• Costume designer Ruth E. Carter takes us through her Afrofuturistic designs.
• Writer Tre Johnson discusses the metaphoric qualities of vibranium.
• Author Yona Harvey reflects on how the film has resonated with audiences across the African diaspora.
• Journalist Hannah Giorgis uncovers how the soundtrack fits into sonic portraits of Blackness.

To celebrate the launch of this book and Black Panther’s global impact, Disney and Penguin Random House are donating books to First Book and Books for Africa respectively. Disney is donating books valued at approximately $1,000,000 to support First Book, a leading nonprofit that serves children in underserved communities and addresses the needs of the whole child by supporting their education, basic needs, and wellness—all of which are essential to educational equity. Penguin Random House (PRH) is donating PRH titles valued at approximately $100,000 to Books For Africa. Books For Africa was founded upon a singular mission: to end the book famine in Africa. BFA collects, sorts, and ships books, computers, tablets, and library enhancement materials to every country in Africa.
Marvel Studios is the licensing branch of Marvel Comics and the highest-grossing film franchise of all time. Marvel Studios has produced and released more than twenty-three blockbuster films with more in various stages of production.
“The compelling collection of essays on Black Panther comes from the voices of Black journalists, authors, poets, writers, and artists from around the world. None of these remarkable pieces pull their punches. Each one unflinchingly examines the impact the film has had both personally and globally. . . . You’ve heard bold claims like ‘you’ll never watch ___ the same way again!’ accompanying most in-depth looks at your favorite movies. Marvel Studios’ Black Panther: Dreams of Wakanda is one of the rare books that absolutely delivers on that promise. It’s not an exaggeration to say Dreams of Wakanda will forever change what it means to you the next time you hear, ‘Wakanda forever!’”—Nerdist