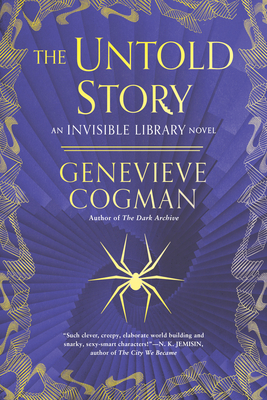 This is book number 8 in the The Invisible Library Novel series.

In this thrilling historical fantasy, time-traveling Librarian spy Irene will need to delve deep into a tangled web of loyalty and power to keep her friends safe.

Irene is trying to learn the truth about Alberich-and the possibility that he's her father. But when the Library orders her to kill him, and then Alberich himself offers to sign a truce, she has to discover why he originally betrayed the Library.

With her allies endangered and her strongest loyalties under threat, she'll have to trace his past across multiple worlds and into the depths of mythology and folklore, to find the truth at the heart of the Library, and why the Library was first created.

Genevieve Cogman is a freelance author, who has written for several role-playing game companies. She currently works for the National Health Service in England as a clinical classifications specialist. She is the author of The Invisible Library, The Masked City, The Burning Page, and The Lost Plot.
“Cogman skillfully gets new readers up to speed on the rich worldbuilding…Bibliophiles new to the series will be charmed by the premise and find this an easy starting point, while returning readers will be thrilled with the nail-biting conclusion. It’s a joy to see this series going strong.”--Publishers Weekly

“Fantasy fans will be thrilled as book eight of the action-packed series ventures further into the depths of the Library than ever before.”–Booklist (starred review)

Praise for the Invisible Library Novels

“A book in which to wallow.”—The Guardian (UK)

“Ms. Cogman has opened a new pathway into our vast heritage of imagined wonderlands. And yet, as her story reminds us, we yearn for still more.”—The Wall Street Journal

“Funny, exciting, and oh-so-inspiring, this is the kind of fantasy novel that will have female readers everywhere gearing up for their own adventure.”—Bustle