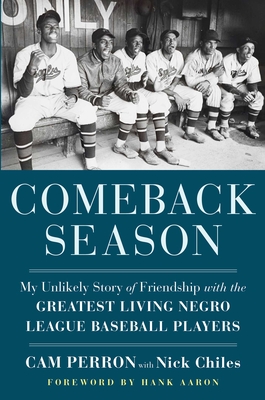 By Cam Perron, Nick Chiles (With), Hank Aaron (Foreword by)


On Our Shelves Now
The uplifting, unlikely, and inspirational true story of the friendships formed between Cam Perron—a white, baseball-obsessed teenager from Boston—and hundreds of former professional Negro League players, who were still awaiting the recognition and compensation that they deserved from Major League Baseball more than fifty years after their playing days were over. Featuring the players’ fascinating stories and original photographs.

Cam Perron always loved history, and from an early age, he had a knack for collecting. But when he was twelve and bought a set of Topps baseball cards featuring several players from the Negro Leagues, something clicked.

Cam started writing letters to former Negro League players in 2007, asking for their autographs and a few words about their careers. He got back much more than he expected. The players responded with detailed stories about their glory days on the field, and the racism they faced, including run-ins with the KKK. They explained how they were repeatedly kept out of the major leagues and confined to the historic but lower-paying Negro Leagues, even after Jackie Robinson—who got his start in the Negro Leagues—broke the color barrier. By the time Cam finished middle school, letters had turned into phone calls, and he was spending hours a day talking with the players.

In these conversations, many of the players revealed that their careers had been unrecognized over time, and they’d fallen out of touch with their former teammates. So Cam, along with a small group of fellow researchers, organized the first annual Negro League Players Reunion in Birmingham, Alabama in 2010. At the celebratory, week-long event, fifteen-year-old Cam and the players—who were in their 70s, 80s, and 90s—finally met in person. They quickly became family.

As Cam and the players returned to the reunion year after year, Cam became deeply involved in a complicated mission to help many players get pension money that they were owed from Major League Baseball. He also worked to get a Negro League museum opened in Birmingham, and stock it with memorabilia.

Sports fans—and anyone who enjoys a heartfelt story—will have their eyes opened by this book about unlikely friendships, the power of memories, and just how far a childhood interest can go.
Cam Perron has been featured on two episodes of Real Sports with Bryant Gumbel and as a TED speaker. In 2017, he was granted the Hilda Award by the Board of Directors of the Baseball Reliquary for distinguished service to the game of baseball. Cam currently runs an ecommerce business selling sports and entertainment memorabilia, and lives in Los Angeles.
“Perron’s ability to channel his childhood interests into something meaningful for others is moving, and his extraordinary account uplifts. Even those who aren’t sports fans will root for this galvanizing story.”
– Publishers Weekly (starred review)

“Enthralling… The players’ stories shine throughout … Baseball fans will thoroughly enjoy this captivating look into a side of the sport they might not know about. This heartfelt book, with a foreword by Hank Aaron, is a must-read, and Perron’s personable writing succeeds in giving often overlooked players a voice.”
– Library Journal (starred review)

“Perron delivers an enthusiastic and detailed account of the players’ work, and his, and it’s a pleasure to read. Baseball fans of whatever stripe will enjoy Perron’s homage to an organization and players too long overlooked.”
– Kirkus

“Perron’s story . . . has a certain sweetness and strength to it. . . . [He] explains his evolution from collector to advocate and, more important, generously shares the extraordinary stories of these last remaining players, often in their own words. For fans, what’s not to love?”
– Booklist