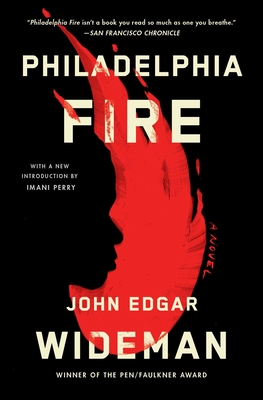 
On Our Shelves Now
One of John Wideman’s most ambitious and celebrated works, the lyrical masterpiece and PEN/Faulkner winner inspired by the 1985 police bombing of the West Philadelphia row house owned by black liberation group Move.

In 1985, police bombed a West Philadelphia row house owned by the Afrocentric cult known as Move, killing eleven people and starting a fire that destroyed sixty other houses. At the heart of Philadelphia Fire is Cudjoe, a writer and exile who returns to his old neighborhood after spending a decade fleeing from his past, and who becomes obsessed with the search for a lone survivor of the event: a young boy seen running from the flames.

Award-winning author John Edgar Wideman brings these events and their repercussions to shocking life in this seminal novel. “Reminiscent of Ralph Ellison’s Invisible Man” (Time) and Norman Mailer’s The Executioner’s Song, Philadelphia Fire is a masterful, culturally significant work that takes on a major historical event and takes us on a brutally honest journey through the despair and horror of life in urban America.
John Edgar Wideman’s books include, among others, American Histories, Writing to Save a Life, Brothers and Keepers, Philadelphia Fire, Fatheralong, Hoop Roots, and Sent for You Yesterday. He won the PEN/Faulkner Award twice and has twice been a finalist for the National Book Critics Circle Award and National Book Award. He is a MacArthur Fellow and a recipient of the Lannan Literary Award for Lifetime Achievement, the PEN/Malamud Award for Excellence in the Short Story. He divides his time between New York and France.
"Daring and award-winning ... Wideman’s quasi-cubist approach to storytelling — full of angular sentence shards and deft rule-breaking — explores multiple facets of the tragedy and sometimes drags the reader and the author himself onto the page."
—Philadelphia Inquirer

"Philadelphia Fire isn't a book you read so much as one you breathe."
—San Francisco Chronicle

"A pyrotechnic display... Wideman charges his sentence with energy that flares into beauty at unexpected moments... [His] work reflects extraordinary talent, will, and courage."
—Boston Globe