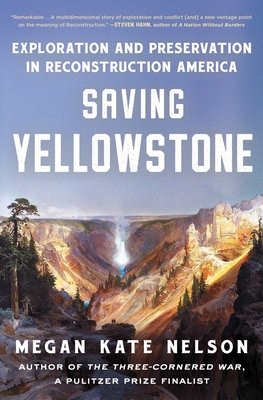 
Coming Soon - Available for Pre-Order Now
From historian and critically acclaimed author of The Three-Cornered War comes the captivating story of how Yellowstone became the world’s first national park in the years after the Civil War, offering “a fresh, provocative study…departing from well-trodden narratives about conservation and public recreation” (Booklist, starred review).

Each year nearly four million people visit Yellowstone National Park—one of the most popular of all national parks—but few know the fascinating and complex historical context in which it was established. In late July 1871, the geologist-explorer Ferdinand Hayden led a team of scientists through a narrow canyon into Yellowstone Basin, entering one of the last unmapped places in the country. The survey’s discoveries led to the passage of the Yellowstone Act in 1872, which created the first national park in the world.

Now, author Megan Kate Nelson examines the larger context of this American moment, illuminating Hayden’s survey as a national project meant to give Americans a sense of achievement and unity in the wake of a destructive civil war. Saving Yellowstone follows Hayden and two other protagonists in pursuit of their own agendas: Sitting Bull, a Lakota leader who asserted his peoples’ claim to their homelands, and financier Jay Cooke, who wanted to secure his national reputation by building the Northern Pacific Railroad through the Great Northwest. Hayden, Cooke, and Sitting Bull staked their claims to Yellowstone at a critical moment in Reconstruction, when the Ulysses S. Grant Administration and the 42nd Congress were testing the reach and the purpose of federal power across the nation.

“A readable and unfailingly interesting look at a slice of Western history from a novel point of view” (Kirkus Reviews), Saving Yellowstone reveals how Yellowstone became both a subject of fascination and a metaphor for the nation during the Reconstruction era. This “land of wonders” was both beautiful and terrible, fragile and powerful. And what lay beneath the surface there was always threatening to explode.
Megan Kate Nelson is a writer and historian living in Lincoln, Massachusetts. She has written about the Civil War, US western history, and American culture for The New York Times, The Washington Post, The Atlantic, Time, and Smithsonian Magazine. Nelson earned her BA in history and literature from Harvard University and her PhD in American studies from the University of Iowa. She is the author of Saving Yellowstone, The Three-Cornered War, Ruin Nation, and Trembling Earth.

"The author displays her strong commitment to including the Native presence in any account of Western history ... A readable and unfailingly interesting look at a slice of Western history from a novel point of view."
—Kirkus Reviews

"In Saving Yellowstone, Megan Kate Nelson has accomplished something truly pathbreaking. She has written a new history of Reconstruction, one that shows how the exploration and conquest of the American West intersected with the ill-fated attempts to establish an interracial democracy in the South. While these two strands of American history are often thought of as parallel, Nelson reveals startling new connections. A masterful storyteller, Nelson’s prose is as captivating as the landscapes she describes. This book is a must-read for anyone who appreciates deep research and powerful narrative.”
—Carole Emberton, author of Beyond Redemption: Race, Violence, and the American South after the Civil War

"Megan Kate Nelson has a remarkable ability to take an unfamiliar event and not only bring it to light, but also use it as a lens for viewing much larger and more familiar events in new ways. In Saving Yellowstone, she presents the making of the first national park as a multi-dimensional story of exploration and conflict and as a new vantage point on the meaning of Reconstruction."
—Steven Hahn, author of A Nation Without Borders

"Terrific... a very good telling of a story that is unknown to most Americans."
—The Reconstruction Era, blog review

“Engaging and unsparing… A gripping history that integrates the Southwest into broader histories of American expansion.”
—Booklist

“Based on extensive archival research, Nelson’s work expands our understanding of how the Civil War affected Indigenous peoples and helped to shape the nation. [A] nuanced portrait of the era.”
—Library Journal, starred

"With lucid storytelling, using nine remarkable characters, Nelson reveals a chaotic, desperate struggle of Union against Confederate, Native peoples against other Native peoples, and Natives on both sides... Rarely is a Civil War book so readable and so new to our understanding."
—David W. Blight, author of the Pulitzer-prize winning Frederick Douglass: Prophet of Freedom

"Fast-paced and suspenseful... This history of invasions, battles, and forced migration shapes the United States to this day—and has never been told so well."
—T.J. Stiles, author of the Pulitzer Prize-winning Custer's Trials: A Life on the Frontier of a New America

"Gripping... The Three-Cornered War brings this battle between peoples, armies, agendas, and the environment to living breathing life."
—Joanne B. Freeman, author of The Field of Blood and editor of Alexander Hamilton: Writings