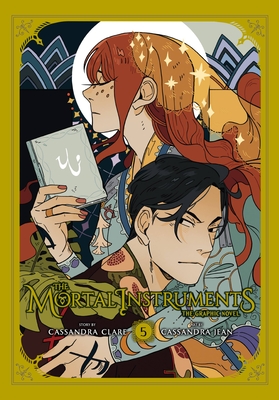 The fifth installment of the graphic novel adaptation of Cassandra Clare’s bestselling The Mortal Instruments! On a mission to save her mom, Clary prepares to leave for Idris, the homeland of the Shadowhunters. Sure, Jace is adamantly against the idea and Magnus refuses to help, but Clary now has powers of her own. What awaits her on the other side of the portal, though, might not be exactly what she’s expecting... The city comes to life through Cassandra Jean’s lush artwork, and a scene penned by Cassandra Clare exclusively for the graphic novel makes this a can’t-miss for fans!

Cassandra Clare vaulted onto the publishing scene with her first YA novel, City of Bones, and has published three other bestselling novels in The Mortal Instruments series. First published in August of 2010, Clockwork Angel marked the first installment of Cassandra's The Infernal Devices trilogy and debuted at #1 on the New York Times list.
Cassandra Jean is a freelance illustrator and comic artist who spends her days toiling with a pen in her hand, and her faithful dog sleeping at her feet. The radio is always on and Gatorade is a constant source of power!