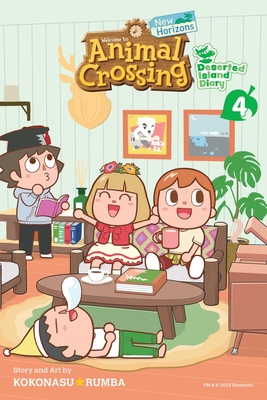 This is book number 4 in the Animal Crossing: New Horizons series.

Join your favorite characters from Animal Crossing™: New Horizons for all-new adventures in this official manga!

What do the residents of Animal Crossing™: New Horizons  get up to when you’re not around? Find out all about their antics in this hilarious manga filled with goofy gags and silly stories!

Too much living it up on Bloop Island has left the residents low on food. It’s time for Coroyuki and friends to journey to other islands to find resources and meet more fun characters along the way!
A Tokyo native, she made her official CoroCoro magazine debut with Ai♡Burger Bakumaru. In 2013, her work Pokupoku Pokuchin won an honorable mention for the 72nd Shogakukan Newcomer Comics Prize, Children’s Division. She’s best known for Four-Panel YO-KAI WATCH: Geragera Manga Theater.