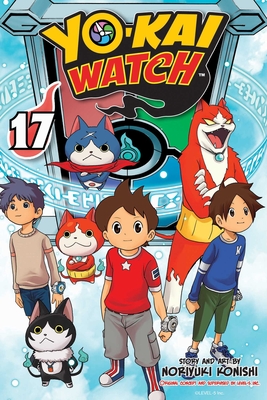 This is book number 17 in the Yo-kai Watch series.

Join Nate as he befriends the Yo-kai of the hit video game YO-KAI WATCH!

Nate Adams is just an average kid until the mysterious Whisper gives him the Yo-kai Watch. Now he can see what others cannot: Yo-kai of all shapes and forms!

A mysterious door opens, causing Nate to run into weird and wacky Yo-kai from the past, present and future. Watch as they participate in a battle royale to decide which Yo-kai is the strongest!
Noriyuki Konishi hails from Shimabara City in Nagasaki Prefecture, Japan. He debuted with E-CUFF in Monthly Shonen Jump Original in 1997. He is known in Japan for writing manga adaptations of AM Driver and Mushiking: King of the Beetles, along with Saiyuki Hiro Go-Kū Den!, Chōhenshin Gag Gaiden!! Card Warrior Kamen Riders, Go-Go-Go Saiyuki: Shin Gokūden and more. Konishi was the recipient of the 38th Kodansha manga award in 2014 and the 60th Shogakukan manga award in 2015.