Where is Alice Cooper? (Hardcover) 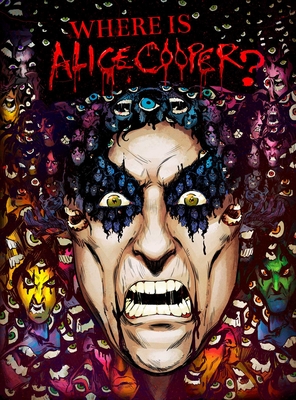 Where is Alice Cooper? (Hardcover)


Available to Order - Usually Arrives in Our Store in 4 to 7 Days
Can you find Alice Cooper? Search for the famous frontman amid elaborately illustrated scenes that depict the madness and mayhem of the musician’s legendary avant-garde aesthetic.

For more than 50 years, Alice Cooper has surprised fans with his rule-breaking, genre-defining, horror-filled theatrical performances. Now, Alice Cooper fans can bring a little of the band’s vaudeville-infused magic home with them with Where Is Alice Cooper?, an official, fully-authorized seek-and-find book featuring the king of hard rock.

With 14 double-page puzzles inspired by Alice Cooper’s iconic albums—including Welcome to My Nightmare, Billion Dollar Babies, and Hey Stoopid—Where Is Alice Cooper? pays proper homage to the classic style expected from the architect of shock-rock.

Say hello to Alice Cooper’s nightmare with these vibrant, whimsical scenes that bring the band’s celebrated horror aesthetic to life. Crafted by the same creative minds who brought you the critically acclaimed seek-and-find book Motörhead: Where is Lemmy? and the fan-favorite graphic novel RUSH: The Making of a Farewell to Kings, Where Is Alice Cooper? is the perfect addition to every Alice Cooper fan’s collection.
Lindsay Lee is an illustrator and co-author of Where Is Alice Cooper? An artist since birth, Lindsay brings her love of music and her unique illustration style to her role as an artist and writer for the award-winning animation studio Fantoons, where she has worked on best-selling titles like Ninja Sex Party: The Graphic Novel, Rush: The Making of a Farewell to Kings, and Neil Peart: The Illustrated Quotes. Lindsay currently lives in Tennessee, and when she's not helping create material for the greatest artists in the cosmos, she’s perfecting her own original comic.