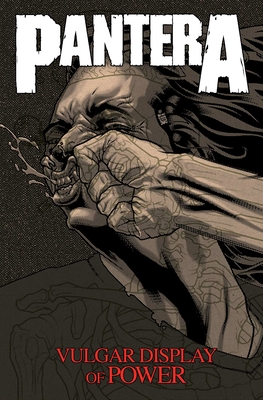 
Coming Soon - Available for Pre-Order Now
The 30th anniversary edition of The Vulgar Display of Power from Pantera celebrates the now landmark work of heavy art!

In the grand tradition established by Z2, the Vulgar Display of Power 30th anniversary graphic novel unites famous fans of the band throughout comics and music to team up on adaptations of all eleven of the album’s tracks. Creators including Alan Robert (Life of Agony), Eric Peterson (Testament), Keith Buckley (Every Time I Die), Burton C. Bell (Fear Factory), Steve Niles (30 Days of Night), Ryan J. Downey (MTV News), Tony Lee (Dr. Who) and illustrators Paul Booth, Erik Rodriguez, Ryan Kelly, Steve Chanks, Kevin Mellon, John Pearson and Danijel Zezelj will each offer a unique interpretation inspired by the lyrics and music to create a whole new way to experience this landmark work of heavy art.
Danijel Žeželj is a graphic novelist, animator, illustrator and painter. He is author of twenty five graphic novels and eight short animation movies.
His work has been published by DC Comics, Marvel, Dark Horse, Heavy Metal, Image, Glénat, Dargaud, Eris Edizioni, The New York Times, Harper’s Magazine, etc.
Since 1997 he has created a series of multimedia performances merging live painting with live music. They premiered in Europe and the USA.
In 2001 in Zagreb, Croatia he has co-founded a publishing house and graphic workshop Petikat.
He lives and works in Brooklyn and Zagreb.

Steve Niles is a writer, best known for works such as 30 Days of Night, October Faction, Criminal Macabre, Simon Dark, Frankenstein Alive! Alive! and Batman: Gotham County Line.?The success of 30 Days of Night sparked renewed interest in the horror genre; Steve's comic was released as a major motion picture in 2007. His ongoing IDW series, The October Faction, was made into a Netlix TV show. Steve was raised in the Washington, D.C. suburbs, developing his interests in music, writing, and making amateur films. He worked in several comic book stores and played in the bands Gray Matter and Three during the heyday of the Washington DC punk scene, both of which released albums on Dischord Records label.  Steve resides outside Los Angeles with his wife, Monica, four dogs, three cats and Gil the tortoise.

Mellon attended Blue Springs South High School and is a graduate of the Joe Kubert School of Cartoon and Graphic Arts. He broke into the comics industry in 2007 with the publication of Gearhead, which was written by Kansas City’s Dennis Hopeless. Mellon and Hopeless also collaborated on Lovestruck.

In 2011, Mellon teamed with television personality Blair Butler for Heart, a four-issue limited set in the world of mixed martial arts.

Ian Edginton is a New York Times bestselling author and multiple Eisner Award nominee. He is currently writing Batman’66 meets The Avengers (Steed and Mrs Peel, not the other ones!) for DC Comics as well as Judge Dredd, Stickleback, Helium, Kingmaker and Brass Sun for 2000 AD. He lives and works in Birmingham, England.

John Pearson is a British Comic Award shortlisted illustrator and artist based in Leeds UK.

John fuses traditional drawing techniques, digital painting and collage to produce highly-detailed and darkly compelling images across a range of printed media. Combining elements of photorealism, popular culture, abstraction and psychedelia to create a unique style and versatility in approach that appeals to a wide spectrum of audiences.

John has exhibited in the UK and USA, organised extensive art experiences across the country, and produced live murals at high profile events both independently and as part of Leeds based art collectives.

Over the last two decades, Alan Robert's band Life of Agony has built a die-hard cult following, selling over one million albums worldwide. Life of Agony is set to release their 5th studio album A Place Where There's No More Pain through Napalm Records on April 28, 2017. Rolling Stone hailed it as “One of the Most Anticipated Albums of the Year.” Robert is also the critically acclaimed author/artist of several IDW creator-owned comic book series. Titles include Crawl to Me, Killogy and Wire Hangers. Crawl to Me is currently in development to become a live-action feature film.

Dave Johnson is an American comic book artist. He began his career in 1985 working for Comico on the title Robotech. In 1991 he was hired by Dark Horse Comics and one year later he started working for DC's imprint Impact Comics on the title The Web. His first official DC Comics publication was in 1992 in the Demon title and since then he has worked on many other titles including R.E.B.E.L.S.; Wonder Woman, The Spectre and more.

Burton C. Bell is an active, Grammy nominated artist, songwriter, lyricist, vocalist, and author. Best known as the co-founder of the industrial/metal band Fear Factory. Bell's notable sci-fi/dystopian concepts, writings and visions of the future can be seen manifesting in today’s world.

Bell has had the opportunity to work with many notable and diverse artists throughout his career, including acclaimed graphic artists Dave McKean and Ben Templesmith, to create artwork for the Fear Factory albums, Demanufacture, Obsolete, and Transgression. In 2015 Bell worked with UK artist Noel Guard to create his first graphic novel, The Industrialist, which subsequently sold out upon release.

Bell is currently working on his conceptual music project, Ascension of The Watchers, as well as new writing projects, and creative endeavors in various mediums. www.burtoncbell.com

-A multiple-time New York Times Best-seller List and Eagle Award winning Writer, Tony Lee has worked professionally for over thirty years, including a decade in trade journalism and media marketing/creation for radio. Since returning to comics in 2003 he has written for Marvel Comics, DC Comics, Dynamite Entertainment, Titan Publishing, Markosia, 2000ad and IDW Publishing amongst others, writing a variety of creator owned titles and licenses that include X-Men, Spider Man, Star Trek, Battlestar Galactica, Doctor Who, Superboy, Starship Troopers, Wallace & Gromit and Shrek.

Keith Buckley is an American rock musician, best known as the vocalist and lyricist of the now defunct hardcore punk band Every Time I Die and the heavy metal supergroup The Damned Things. He is also a published author.

Rodrigo Lujan is an artist and illustrator who has collaborated with more than a hundred publications across Agentina, France, Spain, Puerto Rico, Colombia, and the US.

Raised on a steady diet of Tom & Jerry, Star Wars, Freddy Krueger and Marvel Comics since the late 70s, Steve Chanks has distilled the very best of his distorted pop culture view into a big titted, puss-filled, pulp daydream.

With a drawing style that’s been described as Disney meets Mad Magazine, Steve Chanks has inked his way into such mags as Maxim, Revolver, and Guitar World and has clothed the fans of bands like Mastodon, Lamb of God, Trivium and Avenged Sevenfold.

Along with his best buds, Josh Bernstein and Erik Rodriquez, Steve Chanks is a pivotal member of the art mafia know as The #Number Foundation who are solely responsible for the ever politically uncorrect trash culture rag, Royal Flush Magazine.

Born in Spain, Palo studied at the Joso school and entered comics from the graphic design field in 2005. Notable Works include  "Moon Knight" and "Ghost Panther Volume 1" plus contributgions to Reginald Hudlin's "Black Panther Volume 3".

Eric Peterson is a comic book writer living out of the dusty mountains of Ahwatukee near Phoenix, Arizona. He is the co-creator of Space Bastards, which he considers his third child (the other two being actual breathing human children). Eric grew up making movies in his backyard. Space Bastards is what happens when a person does that for many years and then thinks, "What is the one comic we could create that surely would just be too uncanny for people to grasp or love?" Eric Peterson currently spends his time coming to terms with an audience actually grasping Space Bastards.

Diego Yapur is a Argentine Comic Illustrator and Penciler, Was Born in March 20, 1981 in Belén, Cat

Most recently he has been working for various publishers including Vertigo, DC, IDW, Marvel and Titan Books.

Ryan Kelly is an American comic book artist, known for his work on books such as Lucifer and Local.