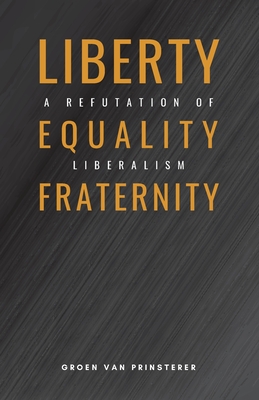 In the middle of the 19th century, the Netherlands struggled with revolutionary fervor. The Enlightenment ideas represented by the motto, "Liberty, Equality, Fraternity," threatened to destroy much of the good that the Dutch Fatherland had inherited. The Dutch historical icon, Groen van Prinsterer, picked up his pen in response.

The envisioned "progress" seemed positive-liberty, equality, and fraternity was the stated goal. But, as Groen van Prinsterer demonstrates in this work, the fruit of progress was anything but positive. The promises were never met and the goods never delivered; but how could they be? Reality itself was negated by unbelief, and delusion concealed in man's mind his fallen state. War was declared not against sin and oppression but against God's order itself and his remedy for sin; and hence, ironically, the politics of man came to be directed, perhaps unwittingly, against man himself.

It was in opposition to the doctrines of 1789 that modern Conservatism was born. A disciple of Edmund Burke, a mentor to Abraham Kuyper, and endorsed by Herman Bavinck, Dutch Conservatism found one of its greatest voices in Groen.

He argues that the Revolution promises freedom yet enslaves; promises equality yet promotes inequality; promises brotherhood, yet these ideas have made men more isolated and violent than ever before. By contrast, he argues, true liberty, equality, and fraternity are found only in Christ and the Christian faith. The secular rejection of God produces a false hope in a bankrupt ideology. Groen begins with a historical analysis of the effects of the Enlightenment motto, then the philosophy itself, followed by the Christian alternative.

Often witty and sarcastic, Liberty, Equality, Fraternity was originally a popular and accessible version of Groen's magnum opus, Unbelief and Revolution. Students of neo-Calvinism, Reformed Conservatism, or Dutch history in general will alike enjoy the accessible prose, rhetorical elegance, and fiery punch delivered by one of Holland's greatest Parliamentarians.