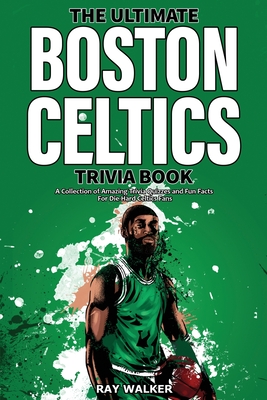 No team has had the impact on NBA history that the Boston Celtics have. With 17 NBA titles, dozens of legendary players, and iconic moments that most teams could only dream about, the Celtics have long been considered the elite franchise of the entire league. It's only fitting then, that there is now a book commemorating all of the amazing details - The Ultimate Boston Celtics Trivia Book.

In the pages of this revealing book, you will learn:

How one Celtics bruiser modified his body to intimidate opponents

Which Boston legend wasn't afraid to share his self-confidence with a room full of All-Star teammates, and then back it up on the court

And so much more As one of the NBA's charter franchises, the Celtics have decades of entertaining stories to share, and they're all included here. From Cousy to Havlicek, Russell to Parish, and Bird to Pierce, all of the franchise greats are featured with details from on and off the court.

Test your knowledge, remember the old days, and learn some fascinating new facts with a dozen carefully selected chapters featuring true-or-false puzzles, multiple-choice questions, and plenty of trivia for fans of every age. Grab a copy today and show your support for the Celtics.