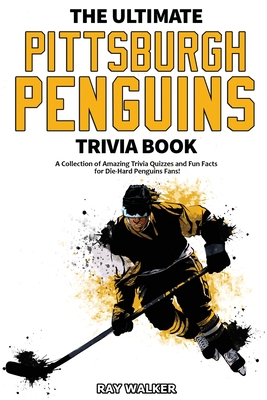 By Ray Walker
$9.85
Available to Order - Usually Arrives in Our Store in 4 to 7 Days

Do you consider yourself a Pittsburgh Penguins fan?

It's easy to see why From Mario Lemieux to Jaromir Jagr, Sidney Crosby to Evgeni Malkin, and all the excellent players in between, the Penguins are a star-studded, top-flight NHL franchise.

But, do you know which of those players scored the most goals for the team? How about which was drafted the highest? If you think you've got what it takes to show off your expertise in all sorts of Penguins knowledge, you can put that confidence to the test with The Ultimate Pittsburgh Penguins Trivia Book

This book will set the record straight on such team history as:

Impress your friends by showing off the depth of your fandom through a series of challenging trivia questions. Select the correct option from the multiple-choice answers provided. Place your bets on whether some of the unbelievable team facts are true or false. And pick up some great anecdotes to share about all the colorful characters who make up Penguins history

Whether you've believed in the team for decades and want to show that you know your stuff, or you're new to Pittsburgh Penguins hockey and can't get soak up knowledge fast enough, this book is sure to please anyone with the good taste to call themselves a Penguins fan