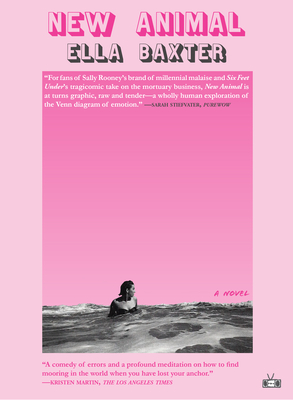 “Just when you think you’ve got the story, Ella Baxter dives deeper. New Animal is a dark, humorous take on grief and connection, centered on a cosmetic mortician and her eccentric family. A ‘grab more wine and keep reading’ kind of book.”
— Kathy Baum, Tattered Cover Book Store, Denver, CO

New Animal is a poignant, darkly comedic look at human connection from a biting and original new voice in Ella Baxter.

Hilarious and heartfelt, New Animal reveals hard-won truths as Amelia struggles to find her place in the world without her mother, with the help of her two well-intentioned fathers and adventures at the kink club.