Thoughts of an American Taxpayer: A Patriot's Views on Righting Our Country's Wrongs (Paperback) 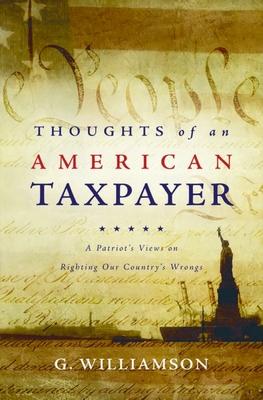 Thoughts of an American Taxpayer: A Patriot's Views on Righting Our Country's Wrongs (Paperback)

"Government is not a solution to our problem; government is the problem." -President Ronald Reagan

Looking all around us, it is evident that the United States of America is heading down a course of economic, financial, and social ruin thanks, in most part, to an irresponsible and careless government. Author G. Williamson, through his passionate writing, shows us why he believes that our out-of-control government no longer cares about our Constitution, economy, businesses, or families. It is a government ruled not by the people but by progressive reformers who seek to place restrictions on our individual freedoms.

Through his powerful words, G. Williamson suggest that the key to turning around this unrestrained government is to understand the reasons for its malfunction. From bailouts, to the economy and jobs, to foreign policy, to our tax system, he effectively informs us of the self-destructive and risky path our government is leading us down. He also describes what we as American citizens can do to reverse this dangerous and precarious direction in which our country is heading.

Don't be left in the dark about the issues in our country any longer. Pick up this motivational and encouraging book today and delve into the Thoughts of an American Taxpayer.

G. Williamson graduated from Southeast Missouri State in Cape Girardeau, Missouri, with a Bachelor of Science in Business Administration. Although he grew up in the Midwest, he currently resides outside of Houston.