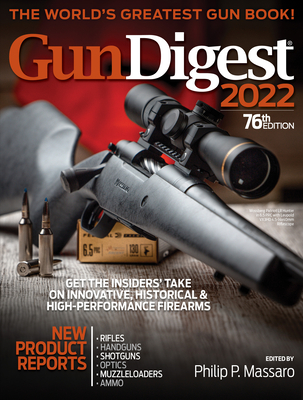 Now in its 76th edition, Gun Digest 2022 is the most-anticipated annual guide to all things new and exciting in the world of firearms. Informative and entertaining articles by the top writers in the field cover every aspect of guns and shooting, including hunting, personal defense, target practice, gun making and collecting. Historical articles provide a look at the role firearms have played in the United States and around the world. "The World's Greatest Gun Book" has remained true to its roots, year after year, for more than three quarters of a century. Gun Digest offers original, expertly written content in what is truly the most comprehensive collection of firearms information in print today.

Philip P. Massaro is the seventh editor of the Gun Digest annual, is a regular contributor to Gun Digest the Magazine and Cartridges of the World, as well as contributing articles and photographs to many different firearms and hunting publications. He has been an avid handloader for three decades, is a land surveyor by trade, a musician by choice, and is happiest in the wildest places on Earth.