The Herd: How Sweden Chose Its Own Path Through the Worst Pandemic in 100 Years (Paperback) 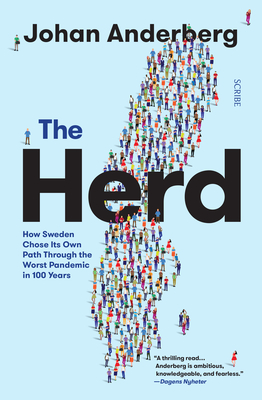 The Herd: How Sweden Chose Its Own Path Through the Worst Pandemic in 100 Years (Paperback)

A fly-on-the-wall account of the herd-immunity strategy that Sweden adopted during the first year of the COVID-19 pandemic.

In the spring of 2020, as a new and deadly virus spread across the globe rapidly, the world shut down. But a small country in Northern Europe remained open. The Swedish COVID-19 strategy was alternately lauded and held up as a cautionary tale by international governments and journalists alike--with all eyes on what has been dubbed "The Swedish Experiment". But what made Sweden take such a different path?

In The Herd, journalist Johan Anderberg narrates the improbable story of a small nation that took a startlingly different approach to fighting the greatest global pandemic in over one hundred years. First, the government instituted no restrictions. Then, it declined to order the wearing of face masks. While the rest of the world looked on with incredulity, condemnation, admiration, and even envy, Sweden stood alone.

But The Herd is more than just a look at the evolution of the singular Swedish COVID-19 strategy. With remarkable ease, Anderberg guides the reader through the history of epidemiology, R0-rates, inoculation, and international organizations and collaborations. He also presents a colorful cast of characters and the ticking-clock decisions they were faced with on a daily basis.

"The Herd is a thrilling read about tight-knit groups of microbiologists and epidemiologists, old grudges, new alliances, and fiery emails... Anderberg is ambitious, knowledgeable, and fearless."
--Dagens Nyheter

"The Herd is exemplary journalism of the kind that comes close to the truth through skilled craftsmanship. Anderberg portrays the events in the right order. He relies on relevant facts. He puts the last year in a historical context. He examines without preconceived opinions... Anderberg's book is like a Corona commission in its own right and a beautiful example of the important role journalism plays in the service of the truth."
--Barometern

"Reading Johan Anderberg's book is not just a way to get perspective and background, detailed descriptions of how the Swedish strategy was formed and what it led to. It is also a way to be released from the debate, both in social and other media. It is extremely cooling. The Herd is no debate book; it is a nuanced report from an incredibly strange time. So strange you need help finding the words to talk about it."
--Aftonbladet

"Journalist Johan Anderberg makes a brave effort to tell the story about how Sweden chose its path through the pandemic... Anderberg's narrative has an effortless ease that manifests itself once the writer has a clear overview, and truly masters his subject without getting sidetracked and stuck on details."
--Sydsvenskan

"Anderberg masters to perfection the societal reportage that closely examines the authorities, effortlessly taking us into the meeting rooms and email inboxes where the Swedish Corona strategy took shape. With efficiency and humor, he visualizes his protagonists... In a climate where media personalities--myself included--often acted as supporters, critics, and hobby epidemiologists, Anderberg has instead buried himself in facts and tried to paint the overall picture... Questions remain after having finished reading The Herd, but this in no way takes away the honor of having accomplished this impressive pioneering work with such energy and wit from Johan Anderberg. The Herd is sure to greatly impact the debate that we've only seen the nascent beginnings of so far."
--Expressen